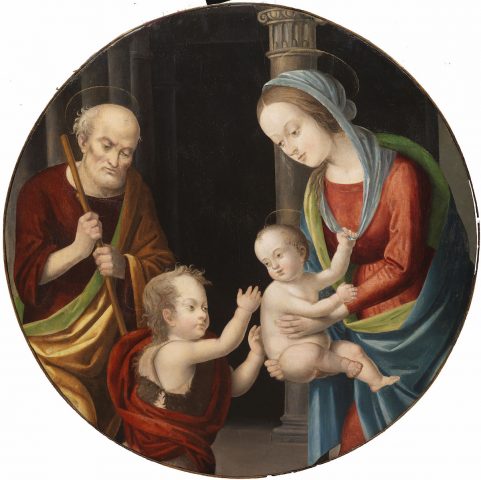 active in the 15th century

This work, previously attributed by Anna Tambini to the painter Giuliano Bugiardini (Florence 1476 – 1555), has been later recognized by Andrei Bliznukov as a work from the circle of Filippino Lippi, in particular by the so-called Master of Memphis, a painter about whom we have only a few information.

The scene depicts the Holy Family with St. John the Baptist, and is characterized by the typical composition widely used in Italy between the 15th and 16th centuries. In particular, the symmetry is not too rigid and creates a compositional balance between the two pairs of figures.

According to Bliznukov, ‘the painting presents numerous references that allow us to place its author in the Florentine context of the early 16th century’.

The diversity of the representation of the faces of St Joseph and the Madonna recalls the works of various artists such as Lorenzo di Credi, Fra Bartolomeo, Pietro Perugino and Filippino Lippi.

Bliznukov attributes it to the Master of Memphis by referring to the “construction of the folds of the clothes” and the “chromatic agreements with particular colours”, such as green, which recall works previously attributed to the Master.

On the reverse of the panel, probably resized in the past, there are four wax seals, two of which are still readable and depict a Crucifixion of St. Andrew and a Masonic symbol.