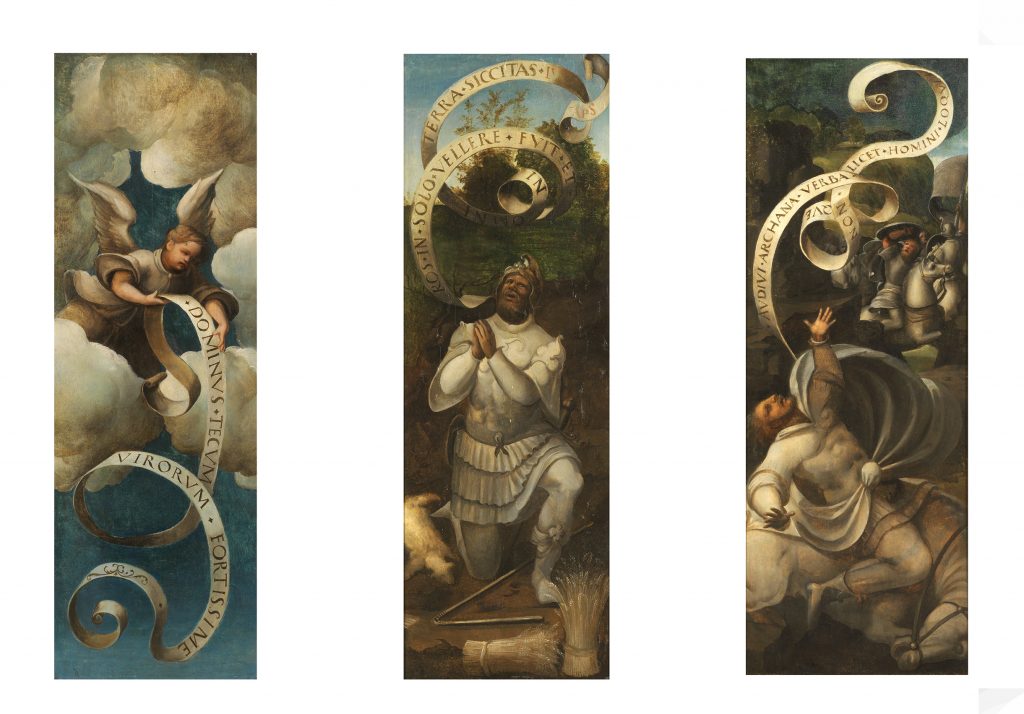 The three panels represent respectively the  ‘Gideon’, the ‘Announcing Angel’ and the ‘Conversion of Saul’. The Announcing Angel, surrounded by clouds, is not delivering the news to the Virgin, as tradition requires, and is holding instead a scroll with the words DOMINVS TECVM VIRORUM FORTISSIME, which can be read as “O strongest among men, the Lord is with thee”. This is the angel’s greeting to Gideon (Jud. 6, 12). The ‘Conversion of Saul’ is represented in the usual iconography, but the inscription on the tefillin is not a biblical passage from the Acts of the Apostles, rather it reads AUDIVI ARCHANA VERBA QUE (sic) NON LICET. This is a quote from an English poem written by William Langland at the end of the 14th century entitled ‘The Visions of Peter the Ploughman’, in which the story of St Paul is thus paraphrased. The three panels must have been part of a cabinet of a small study which depicted scenes of heroes of Christianity, including St Paul. Recently, the paintings have been published and attributed to the important French painter Jean Cousin, the most prominent of the local painters and who was part of the large workshop that decorated the Palace of Fountainbleau, thus bringing French painting into the great movement of European Mannerism, dominated by Florentine and Roman styles. In these panels, in fact, the influence of Primaticcio and of so-called anti-Classical Roman painting is evident.