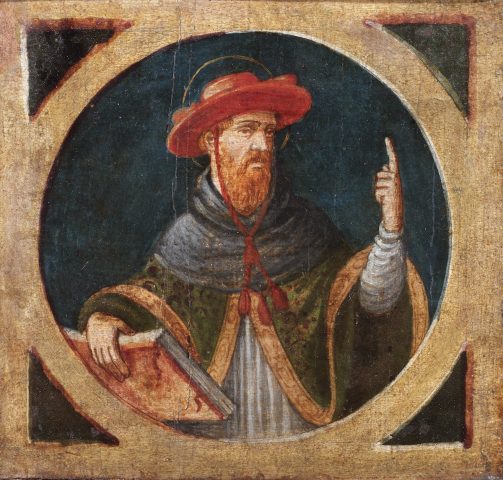 ARTIST OF THE CIRCLE OF RAFFAELLINO DEL GARBO

The saints depicted in this pair of paintings are recognizable as Saint Francis (1182-1226), founder of the famous religious order, and Saint Bonaventure of Bagnoregio (1217 c.-1274), thinker and General Minister of the Franciscan order, who was the biographer of the saint from Assisi. The former, recognizable by the cross and his stigmata, wears the Franciscan habit, which has darkened noticeably due to the natural alteration of the colour. Saint Bonaventure, cardinal and bishop of the Church, on the contrary wears a cardinal’s hat and cope, which is partially covered by the habit of the order. He holds a book in his right hand, a reference to his activity of theologian and author of the Legenda Maior, the official biography of Saint Francis in Latin, and points his left index finger upwards, in a gesture that may be linked to the neo-Platonic orientation of the religious.

The two objects originally formed the bases of pilasters that were part of an architectural frame, and were placed on the lower sides of the predella. Among the artists who were closest to the author of these works we indicate Raffaellino del Garbo (1466-1524), a Florentine painter who was a pupil of Filippino Lippi, characterized by his graceful and very appealing style.