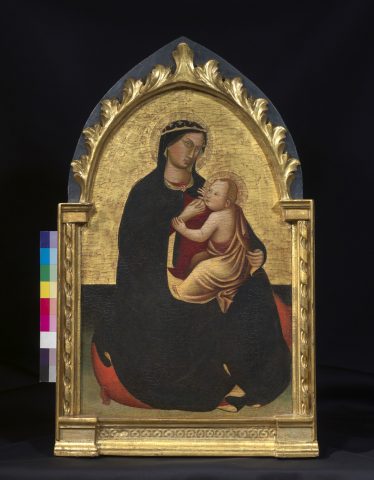 The anonymous master known as the Master of Saint Ivo, a painter who probably took inspiration from the elegant mastery of Agnolo Gaddi, was an artist active in the late Fourteenth and early Fifteenth century, whose critical reconstruction was commenced by Federico Zeri. From the studies of the great expert, who initially united a small group of works under the name “Master of the Christ Church Gallery”, to the recent monographic article by Costanza Baldini (The Master of Saint Ivo: profile of a Florentine painter between the 14th and 15th century in “Arte Cristiana”, 829, XCIII, 2005, pages 261-276), various works have been added to his corpus, now quite large. The work whose rarity has suggested the name of this author is a painting on wood kept at the Palazzo di Parte Guelfa in Florence, which features precisely the unusual motif of Saint Ivo who admires Justice.

The work on wood presented here is on the contrary, as Mauro Minardi points out in his study on the painting, a variation on the familiar late Fourteenth-century theme of the “Madonna of the Humility”, here contaminated by the iconography referred to as the “Madonna nursing the child” in which the Child tenderly reaches for his Mother’s breast. There are various works intended for private worship featuring the Madonna with Child that closely resemble this work, including, precisely, the one which caught Zeri’s attention, or in other words the altarpiece now in Oxford (see in Baldini cit., n. 1, p. 262).There are evident analogies between said painting and the one presented here, in the Child’s physiognomy, the Madonna’s clothes – of which edges vaunt the typical late-Gothic sinuous development, evoking the contemporary Lorenzo Monaco – in the characteristic sharp and sculpted folds.

According to Minardi, who correctly observes that the master may be distinguished by a “certain detached severity of his personalities” which may here be recognized in the austere face of the Mother, the work may reasonably be dated to around 1400, the period in which the style of the Master of Saint Ivo most closely resembles that of Mariotto di Nardo.