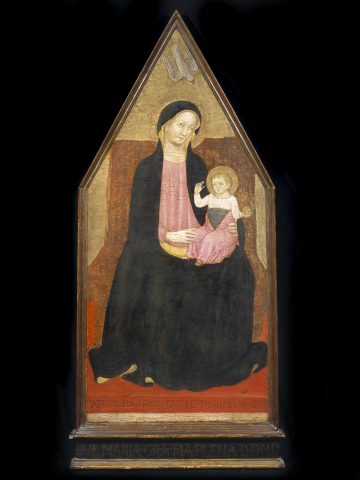 This large painting on a pointed wooden panel with gilt background has been published as the work of the Florentine painter Ventura di Moro (see E. Neri Lusanna, Gothic art in Chianti: reflections and novelties in “Chianti. History art culture territory”, 22, 2002, p. 150, fig. 13). In fact, various details suggest this author who reconciled Gothic elements with Renaissance innovation, as the morphology of the faces of Virgin and Child, the edge of the Madonna’s dress and the typical waving development of the ground. Particularly apt comparisons may be made with the central part of the triptych found in the church of San Donnino in Celle, Dicomano.

This painter had his atelier in Florence, in Corso degli Adimari (E. Neri Lusanna, Ventura di Moro: a re-examination of the circle of Pesello, in “Paragone”, XLI, 485, 1990, p. 4), but he was also active in the territory between Florence and Siena and in particular in the Chianti district, which is probably the origin of this painting on wood. In fact, the inscription “MATTEO DI HASTRUCO DANDREA PELLANIME LORO E SUA” that appears along the base of the throne on which Virgin and Child are seated, might refer to the patronymic Castrucci “attested in Chianti, especially in San Casciano, where the presence of a family with this name is historically documented” (E. Neri Lusanna, cit., 2002, p. 150).

An image of the work, attributed to the same artist, also appears in the catalogue of the photographic archive of the Federico Zeri Foundation (inv. 32224).