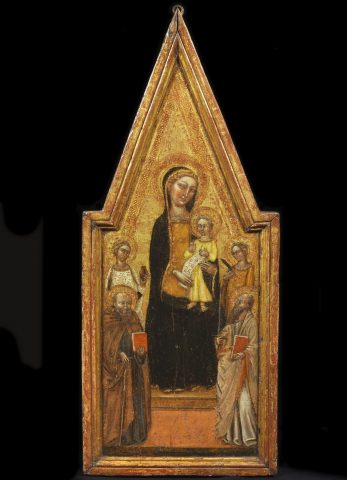 The small cuspidate painting was certainly created for private devotion. It was a small altarpiece displayed in a private context and is an object of the most genuine Tuscan tradition.

The work depicts the Madonna and Child on a throne surrounded by four saints represented in a hierarchical manner, i.e., smaller in scale than the Virgin. On the left, in the foreground, is Anthony the Abbot, dressed in his habit and holding a ‘T’ shaped stick, his typical attribute, and behind him is a martyr noblewoman, enveloped in a white and gold tunic, elegantly worked in sgraffito. This is probably St Lucia because she is holding a lantern. In front of her is another female martyr painted in a symmetrical manner. She is probably St Catherine of Alexandria, while on the proscenium, in front of Anthony, is St Paul, whose large sword is clearly visible.

The decorations on the robes, the marks on the halo and along the perimeter of the panel, and also the structure of the painting itself suggest a Sienese product from the end of the fourteenth century, by the hand of a painter who cannot be identified as one of the active artists of the time, but who surely had contacts with Francesco di Vannuccio, because of his grave expressiveness, and with Martino di Bartolomeo, specially for the ornamentation.