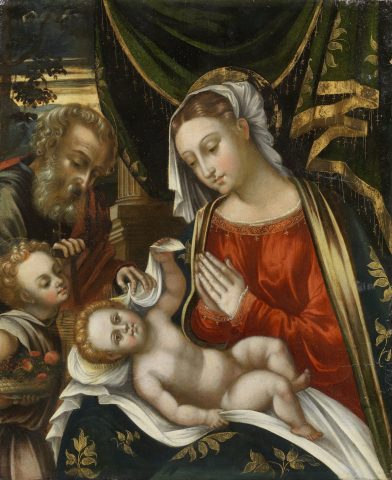 GREEK MASTER ACTIVE IN VENICE DURING THE 16th CENTURY

The panel under consideration depicts the Virgin in adoration with a baby Jesus reclining comfortably on her lap. To the side Saint Joseph and a young Saint John look on. In the background through sumptuous drapery one can just discern the plinth of a column and an evocative sunset.

The work differentiates itself through an interesting co-existence of refined workmanship and archaic elements. This characteristic, together with the presence of details such as the stylized fringe of the background drapery reveal the particular nature of this painting done in all likelihood by a Greek artist working in Venice. For example, the Virgin, vaguely inspired by local Renaissance models, points us in the direction of the Venetian school of painting. On the other hand, certain details, handled with considerable care and precision – such as the workmanship of Saint Joseph’s beard – recall the delicate execution found in icon painting.

This small panel can be dated to the first ten years of the 16th century, certainly before the arrival of El Greco in Venice around 1567 which marked a period of fruitful exchange between the Venetian and Byzantine schools.