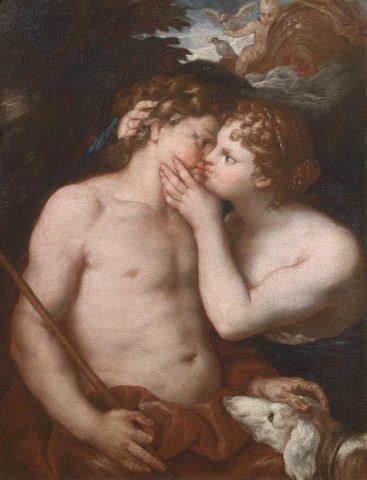 This important painting has been identified by Emilio Negro as the work of Pietro Liberi. Among the most sought-after authors of his period, with important international commissions, the famous Venetian artist is best known for works like the one presented here, charged with eroticism and passion, paradigmatic of the libertine climate characterizing Venice until the Eighteenth century. It features the love between Venus, goddess of beauty and fertility, and the young and beautiful Adonis. The latter is here shown with a stunning virile torso, in a pose which reminds of antique statues, and in particular the Augusto di Prima Porta at the Vatican Museums, that Liberi may have observed in his youth, when he visited Rome to study in the late Thirties of the Seventeenth century. Above, dashed with striking yet concise strokes in the best Venetian tradition, the artist has painted Venus’ carriage and the doves that pulled it, and the ever-present amorino.

Elements typical of Liberi comprise the refined incarnadine, with its particular “voluminous brushstrokes in warm and well-matched shades” (Negro) as well as the way the goddess holds the face of her beloved in her hand, and which can also be found in paintings as Jupiter, dressed as Diana, seduces Callistus in its different versions or the Virtue and Prudence, from the collection of the Marquis of Exeter in Stamford.