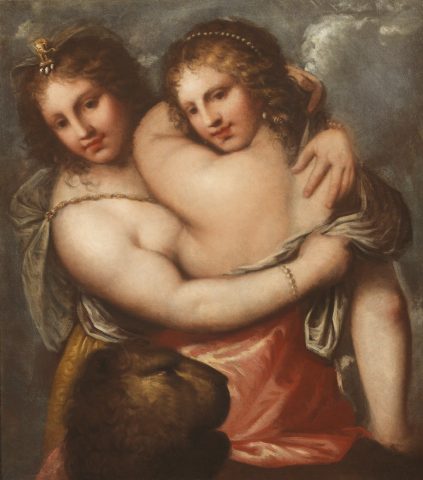 The enigmatic embrace between two female figures represented in this painting certainly implies precise and mysterious allegorical meanings. If, on one hand, the unreal, fantastical lion muzzle on the foreground might reference Venice or allude to the virtue of Fortitude, the two young girls do not seem to offer any further hints to help identify the subject.

Marco Riccomini, the scholar who authored a study on the work attributed to Pietro Liberi, a painter active in Venice, has tentatively considered the possibility of identifying it as the canvas Justice and Peace, cited in the sources of the Czérnin collection in Prague, a hypothesis that is both appealing and difficult to verify, without there being any specific iconographic references. However, the elephant on the head of the girl on the left, which the scholar correctly associated to the indications found in Cesare Ripa’s Iconologia (1603) about Temperance, could instead be related to Justice, thus providing a significant support for the identification of this work as the lost canvas from Prague. In 1847, Pietro Selvatico, while describing the bronze flagpoles in Piazza San Marco, wrote about how the base of one of them reflected the “paramount care of the artist, who associated Justice to the elephant, emblem of strength, of prudence, temperance and of many other virtues, which it was destined to symbolize ever since the Egyptians”.

Another possibility would be the identification of an allegory for Temperance, more commonly associated to the elephant, and Fortitude, with the lion thus losing its Venetian connection in favor of one with the virtue.

Aside from its obscure significance, the canvas can be attributed, as claimed by Riccomini, to Pietro Liberi, one of the most renowned Venetian artists of the second half of the seventeenth century. The painter authored other works with allegorical meanings, such as Fidelity and Peace, part of a private collection, a painting of a comparable size in which the two figures are portrayed in a similar embrace. The most interesting comparison, however, can be made with Virtue defending Innocence from Vice, at Palazzo Agliardi in Bergamo, dated around 1660, known also for the other workshop drafts, in which the female figure on the right, who is also accompanied by a lion, looks almost identical.