The Triumph of Amphitrite and Neptune 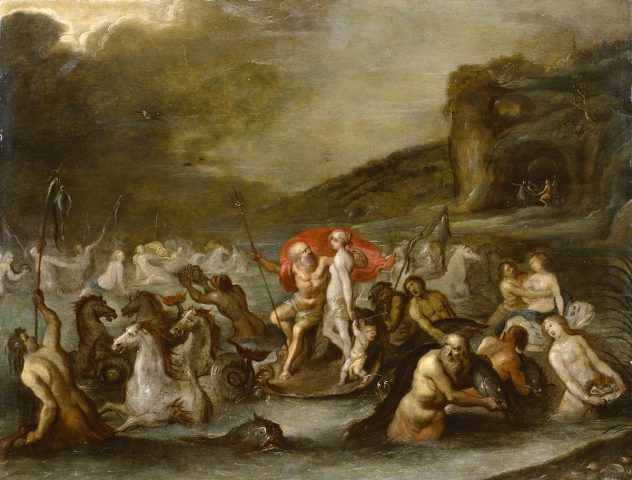 The Triumph of Amphitrite and Neptune

Neptune and Amphitrite, the god of oceans and his bride in antique mythology, are depicted together in a conch-shaped chariot pulled by seahorses. They are surrounded by the customary accompaniment of Nereids and Tritons; a large number of them is also visible in the distance. This relatively large work on copper is, as confirmed by Giancarlo Sestieri, attributable to the Flemish painter Frans Francken the Younger, son of Frans I the Elder (1542-1616) and respected member of this dynasty of painters from Antwerp. When visiting Italy in his youth, Frans Francken II studied the Venetian masters with particular attention, and he probably had the opportunity to meet Peter Paul Rubens, another source of inspiration for his style. Specific references to this work may, as the expert points out, be found in a smaller work (30×41) with the same motif at the Prado Museum in Madrid. The resembles in terms of style and composition between the two works on copper are impressive; for instance, the male figure in the foreground who is carrying a large fish on his shoulder – which despite variations is similar in both paintings, with the torsion of the bust and the view of the muscular body – the types of fantastic marine animals depicted, and the general composition, which is enhanced by a grotto full of personalities in both works.