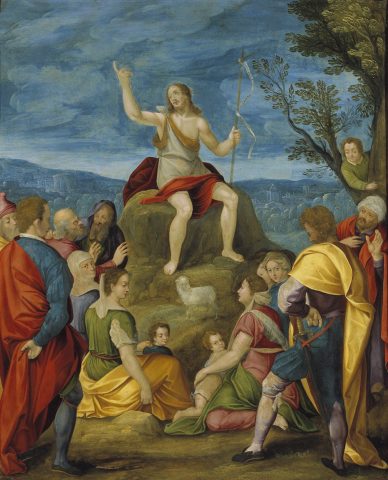 This work on copper of considerable size features the Baptist in prayer. The saint, clothed in animal skins and a red cape, is seated on a mass; he holds the processional cross with the customary knotted cartouche with his left hand, while he points Christ out to the crowd with his right. An imaginary city with Gothic-style buildings lies among gentle hills in the background.

The recognition of this painting as the work of the German late mannerist painter Johann König is due to a courteous indication by Wolfgang L. Eller, whom we thank. The attribution has subsequently been confirmed by Alessandro Nesi, author of a study on the painting in which the expert focuses on the “noteworthy receptivity” and “quite variegated interest in Italian painting” of the German artist, which justify the previous placement of the work in a Tuscan context. In fact, König travelled to the Peninsula around 1610, visiting Venice, Mantua and Rome and, as the expert supposes, probably also Florence, where he could “obtain inspiration from the paintings in the study of Francesco I”. As of 1614 the artist was once again in Germany, and in 1618 he signed and dated an Ecce Homo (Christie’s, London, 5 July 2007, no. 49), one of the paintings best suited to a comparison with this work on copper. In the work which appeared in the London antiquity market, along with a completely Nordic precious rendition and attention to detail, one also perceives a subtle reinterpretation of early Sixteenth-century Italian – especially Venetian – art by the painter, and the soft complexions and very typified faces characteristic of König are evident, both in that painting and the work on copper subject of this study. Another work that is equally interesting for purposes of comparison with this painting on copper is the Death of Niobe’s children, in a private collection, both due to the anatomies and to the landscapes, which show a clear Elsheimerian influence.