The meeting of Isaac and Rebecca 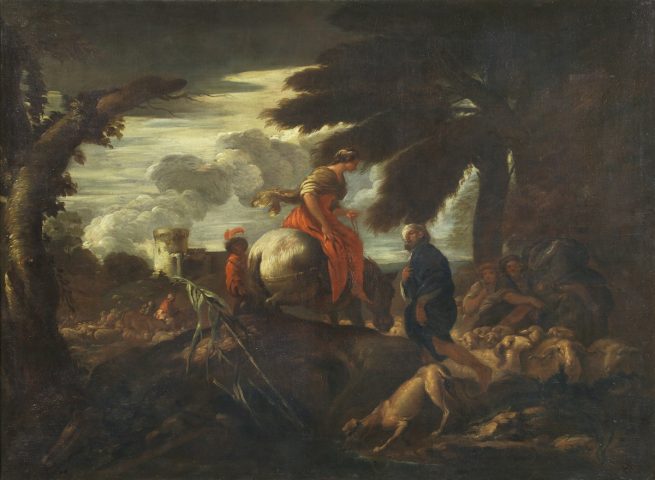 The meeting of Isaac and Rebecca

Traditionally representing a biblical episode of Jacob’s story, told in the Genesis (29: 15-30), the painting is actually more likely to represent a scene from the same text of the Old Testament: the encounter between Isaac, son of Abraham, and his future wife Rebecca. What was initially and erroneously thought to be the subject of this composition was in fact handed down to us by a well-known 18th century engraving by Jacobus Coelemans which depicts the 1640 painting, now at the Hermitage of St. Petersburg. A later version of it is preserved at the San Martino Museum, in Naples. Both paintings are the work of Giovanni Benedetto Castiglione, also known as Il Grechetto, one of the great protagonists of the 17th century art in Genoa.

Art historian Emilio Negro attributes the work here presented – a much larger painting obviously based on his father’s famous work, with a few changes and a less vivid chromaticism – to Giovan Francesco Castiglione, the son and pupil of Il Grechetto who was “mainly active in Liguria and Mantua, where he took his father’s place as the court painter of the Gonzagas”. Negro compares our painting to one of the younger Castiglione, the Journey of Rebecca to the Well, a 1689 oil on canvas, preserved at the Pinacoteca Ambrosiana in Milan (inv. 144).