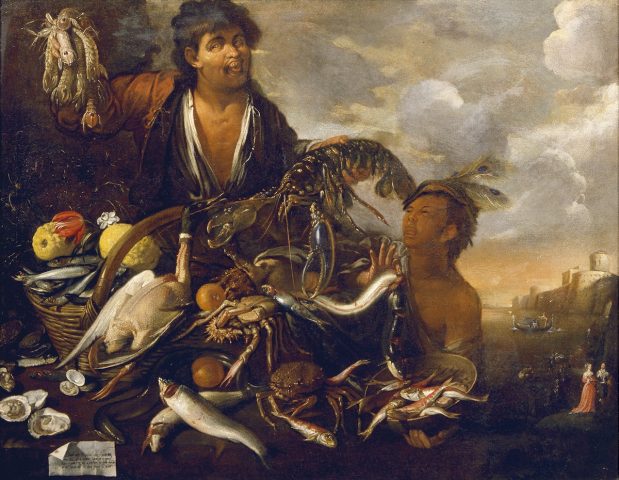 This large painting featuring a still life and figure, where various wares are presented to the passers-by by coarse sellers of popular origin, has been inspired by the first works of this genre, which originated in Flanders but was then continued principally in the Sixteenth-century Emilian tradition of Passerotti and the Carracci cousins. What makes this work so extraordinary is not so much the outstanding quality, witnessed by the impressive rendition of the still life “which does not fear comparison with those of the members of the Recco and Ruoppolo families”, as the fact that it is a matter of a signed and dated work, something especially rare in the Seventeenth century, particularly for a still life. Its author, German Joseph Heintz, son of a painter and nicknamed “the younger” to distinguish him from his namesake father, arrived in Venice already in 1625, and was to stay there until his death, becoming a recognized artist. In 1660 Boschini defined him “bizarre and very capricious painter”, adjectives which are well suited to the characteristics of this painting, of which we would like to underscore the tasteful detail of the ticket fixed to the edge of the table, a motif inspired by the feverish pursuit of verisimilitude in the Fifteenth century by the Bellini brothers and Antonello da Messina, with a folded corner and an inscription in Venetian dialect which is by now difficult to decipher – defined by Mariacher a witty text in verses, of a popular character, concerning the motif of the painting – and the wonderful landscape with the pair of lovers and the gondola moving away in the background, an element which evokes the fascinating adoptive city of the painter and his extensive activity as landscape painter. This painting was once part of a pair, with another featuring a quite similar composition, depicting a boy showing a large red crustacean. Published on several occasions since its appearance in famous exhibitions as the Exhibition of the Seventeenth century in Venice and in Veneto held in 1959, curated by Pietro Zampetti and the first major exhibition of Italian still lives held in Naples in 1964, this painting has been included in a recent monographic study on the author by Daniele D’Anza.