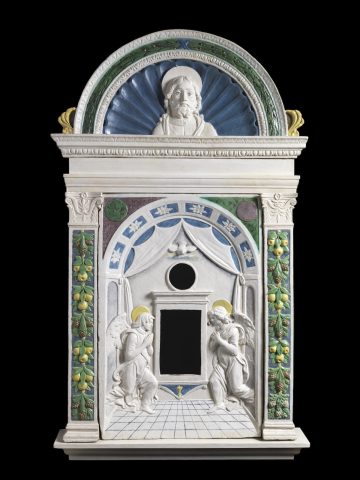 This rare wall tabernacle has been traced back to Andrea della Robbia by Giancarlo Gentilini. Andrea, one of the great protagonists of the della Robbia family and nephew of the well-known Luca.

In his exhaustive study, Gentilini describes this work in minute detail as “significant evidence of Andrea’s versatile creative genius”; it was initially composed of five elements, four of which are still present (the step is missing), including the molding (without a frieze). The principal element purports to be a classical architectural space under a coffered barrel vault in which two angels in adoration and the dove of the Holy Ghost appear. In the center are two openings, one for the consecrated Host – at one time protected by a small door probably in bronze – and an oculus. On each side are two Corinthian pilasters decorated with pinecone, quince and orange clusters. Completing the work is an arched molding dominated by a bust of the Redeemer rendered as a Roman bust within a shell- shaped niche of classical origin.

As Gentilini points out this type of tabernacle with its iconographic repertory has “very precise similarities to other sacramental niches of similar dimensions which art historians have generally agreed were made by Andrea della Robbia or his workshop”. Building on experimental solutions from artists like Bernardo Rossellino and Desiderio da Settignano, Andrea created numerous examples of wall tabernacles, such as the ones preserved in the abbey at Sansepolcro, in the cathedral at Barga and in the church of Santi Apostoli in Florence, made between the end of the 1500s and the 1510s, which excel in their monumentality and complexity. In particular Gentilini highlights two examples that bear a close resemblance to ours; the tabernacles preserved in the churches of San Pietro di Anchiano in Borgo a Mozzano and in Cappella in the province of Lucca. In addition to similar decorative repertories they are all characterized by “advancing angels in dynamic poses” a particularity that seems to belong to the artist’s works during the start of the 16th century.