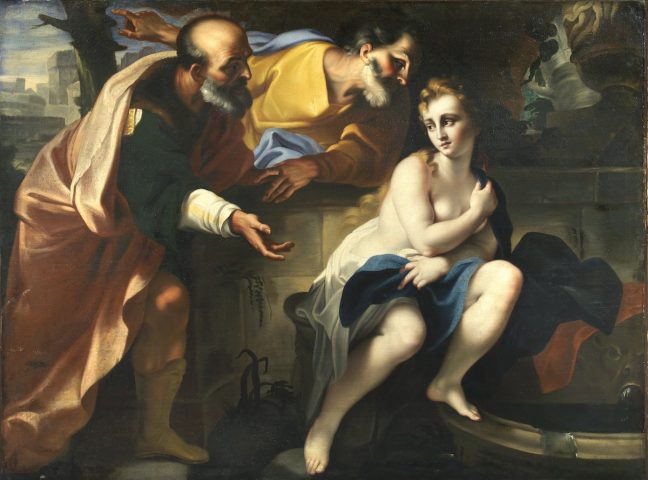 The work here presented depicts the steamy episode, taken from the Old Testament (Daniel, chapter 13), in which the virtuous Susanna, married daughter of a rich Jewish man, is caught bathing in the garden of the palace where she lives by two older men. After she refuses to give herself to them, they get her arrested on false accusations, but the will eventually be exposed.

Legnanino, who some sources say was a student of Cignani in Bologna and of Maratta in Rome, “distinguished himself mainly for the frescoes commissioned by the Court of Savoy, starting with the ones made between 1695 and 1703 in twelve rooms of the palace of Emanuele Filiberto Amedeo of Savoy, prince of Carignano” in Turin, and for the frescoes in a number of important churches, for the most part located in Lombardy.

The scholar rightly points out how this piece is connected to a composition by Guido Reni now in the National Gallery of London (inv. n. NG 196), in which there is a big similarity, along with the overall structure, in the bearded man’s partly shaded head.

Legnino, the scholar adds, authored at least another version of this composition, a small grisaille canvas, part of a private collection (44,5×60,5 cm), a pendant of Judith and Holofernes, both published years ago and made during the artist’s later years, at the beginning of the eighteenth century. The scholar, rather than assume the grisaille had a preparatory function, speculates that it was “conceived later, as a proof of his prowess and, simultaneously, a ‘souvenir’ of a [significant] commission”, such as the canvas of large size here presented.