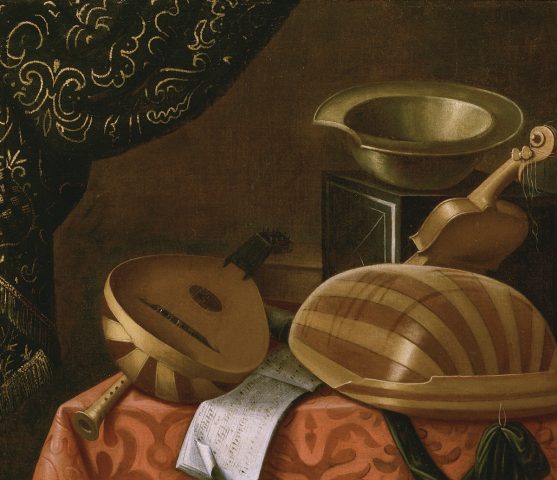 Paintings of musical instruments seen in perspective represents a genre within a genre; it was created by Baschenis and was very diffused in the Bergamo area in the Seventeenth century. While this unmistakable style had its roots in Renaissance marquetry perspectives and in the ‘optical’ approach of Lombard painting, it did not become popular until the Seventeenth century when a Caravaggesque use of light was combined with a Baroque predilection for scenic views, often charged with a subtle allusion to the transitory nature of the terrestrial world.  It is in this sense, in fact, that one has interpreted the frequent naturalistic undertone of the dust which has accumulated on the instruments – which we find also in this painting – a “clear allusion to time, which consumes everything”.

As Lanfranco Ravelli has pointed out – and we take the opportunity to thank him for his assistance – copies of the lute shown in perspective in this painting and the score lying on the edge of the table, with a page that has rolled on itself, can be found in various paintings by the workshop and followers of the Bergamo-born painter, as in the specimens reproduced by Marco Rosci.