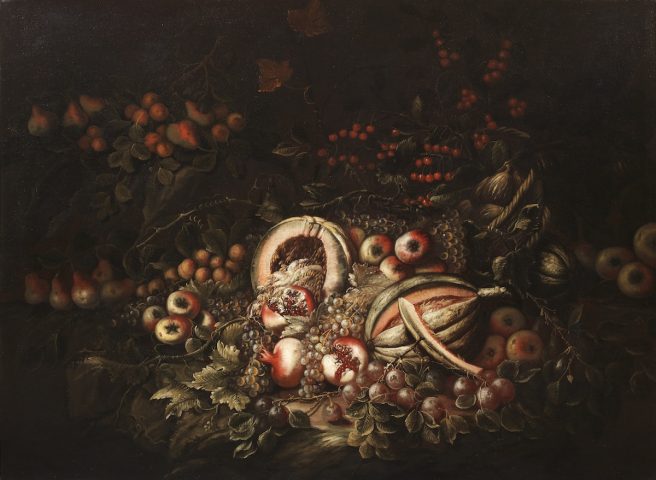 These two splendid still lives in typically Baroque style feature a cascade of summer fruits; in the centre of the composition juicy watermelons and melons, respectively, open up to reveal their refreshing flesh. The recognition of the author of this pair of paintings, which have reached us with a reference to the Tuscan school, is the work of Alberto Cottino. As reconstructed by the scholar, the two canvases “represent a fundamental addition to the body of works” of the painter Paolo Paoletti, an artist who was active in Veneto and Friuli, and whose career was first subject of a critical reconstruction by Tito Miotti.

As Luigi Lanzi remembers in 1796, Paoletti “distinguished himself first and foremost in flowers, and he also painted fruits, vegetables, fish and game very true to life”. After his birth in Padua, Cottino recounts, the artist moved to Venice where he was a member of the local guild of painters from 1708 to 1715, the year when he had to move to Udine, a city where he was protected by the local Caiselli family; works of the artist are documented to have been part of the collections of several other families in the Friuli region.

To corroborate the attribution to Paoletti, the scholar underscores the resemblances between this pair of still lives and three canvases at the Gallerie dell’Accademia in Venice, which were probably painted during the sojourn in Venice, and which the self-same Cottino has recognized to be works by Paoletti and another group of four paintings found at Castel Thun in Vigo di Ton.

All the works which resemble this pair of paintings most closely, as those mentioned in the foregoing, may according to the scholar be dated to the Venetian period. Also the canvases presented here, “of excellent quality and state of preservation” may according to Cottimo have been realized by the first half of the second decade of the Eighteenth century, “as those which are presumed to have been painted in later periods feature landscape backgrounds with a brighter palette and greater luminosity”, as well as a lower quality level.