Still life with flowers and fruit 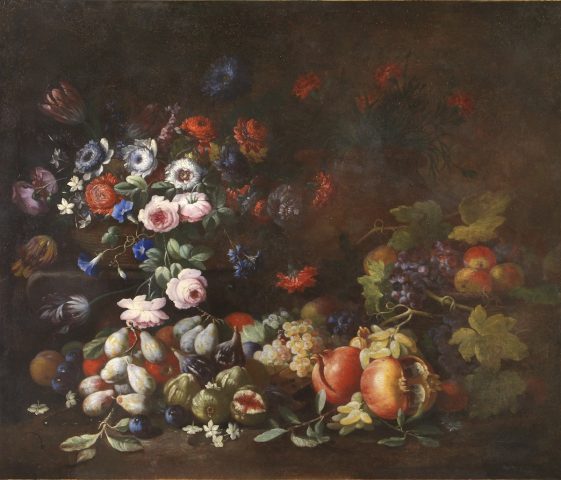 Still life with flowers and fruit

Signed in the lower right corner by an artist trained in Giovan Battista Ruoppolo’s worshop, Francesco della Questa, this painting has as its subject a still life with fruit and flowers. The artist’s naturalistic rendition and material solidity, not yet free of Caravaggio’s influence, gave way to a levity that belongs more to the eighteenth century. This orientation is evident in this painting, especially in the flowers, which delicately spread around the vase, evoking the airy compositions of the artist’s peer, Gaspare Lopez. Della Questa, who was probably of Spanish descent, is mentioned in a passage from De Dominicis’ Vite, in which he writes “and among other things, which he so faithfully recreated, he beautifully depicted greenery, for which he was praised profusely”, hence “he was employed by various noblemen, who wished to embellish their rooms with his paintings, since, in that time, they were amateur painters, and great fine arts enthusiasts”.

The Neapolitan artist’s most prestigious work was probably his “Seafood and hydrangea herbs”, made with the collaboration of other great fellow artists, under Luca Giordano’s supervision, for the 1684 Corpus Domini celebration, organized by the Viceroy of Naples, the Marquis of Carpio.

Other compositions similar to the one presented here have been on the antiques market on more than one occasion: let us recall, for instance, the flower and fruit pendant auctioned by Dorotheum in 2010 (October 13, n. 459) and the still life similar to one of the pieces of the already-mentioned pair, sold by the same auction house (October 6, 1999, n. 124).