Still life with bunch of flowers in an embossed metal vase 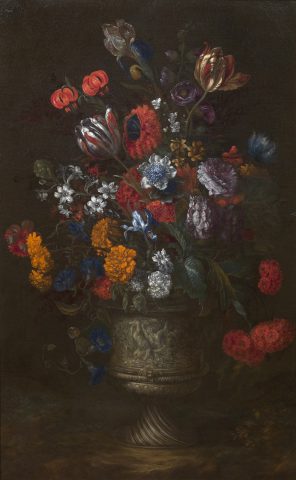 Still life with bunch of flowers in an embossed metal vase

This still life with a markedly vertical format has been attributed to the Florentine painter Bartolomeo Bimbi by Mina Gregori. In fact, the painting, in which the expert recognizes “tulips, anemones, irises, lilies, Maltese crosses, tuberoses and convolvuli”, is connected to other works attributable to the master who worked for the Medici, among which we may mention, in particular, a painting that appeared in the French antiquarian market in 1990 and which is documented by a photograph at the Dutch Institute of Art History of Florence (no. 21157), which in addition to featuring a similar historiated metal vase with scalloped base, is characterized by analogous measurements (102×71).

Bartolomeo Bimbi, pupil of Lorenzo Lippi and of Onorio Marinari, came into contact with a specialist in the still life genre, Mario dei Fiori, in Rome. On his return to Florence, in the last decades of the century, he commenced to work – a collaboration that was never interrupted – for the ruling family, linking his name to the production of paintings of fruits, flowers and animals, often also for documentary and scientific purposes – as for instance the very famous ‘repertories’ and paintings that witness rarities from both the vegetal and the animal world – an activity that is amply documented by the collections held by the newly founded Still Life Museum of Poggio a Caiano.

The attribution to Bimbi has been independently proposed by Fred Meijer (RDK, Den Haag).