Still life with armature, trumpet, flag, gun, cushion with a small dog and brocade draperies in an interior 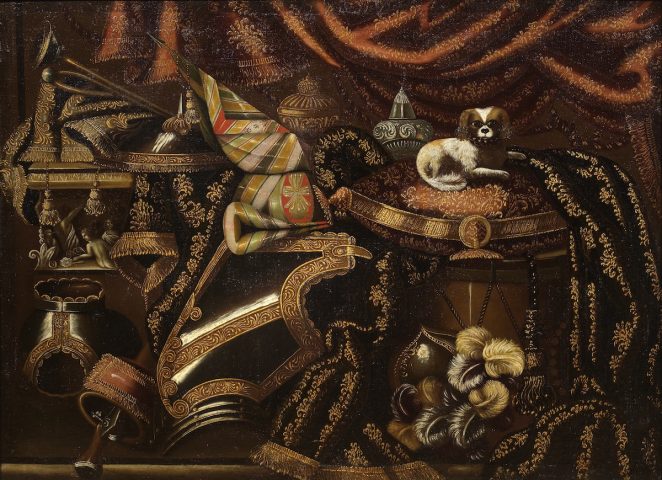 Rome, active in the second half of the 17th century

Still life with armature, trumpet, flag, gun, cushion with a small dog and brocade draperies in an interior

The more extensive knowledge of a milieu that has until quite recently been somewhat neglected by researches, as still lives, has resulted in the appearance of numerous names of hitherto forgotten artists who have nevertheless played an anything but negligible role in the historical-artistic vicissitudes of the period. Paintings like the one presented here would formerly certainly have been attributed to Francesco Noletti called the Maltese (1611 c.-1654), also known as Fieravino. As Davide Dotti, author of a study on this painting, clarifies we are now able to retrace this kind of works to the “second rank” of artists who, in the wake of the mysterious Fioravanti and, precisely, of the Maltese, worked in Rome in the second half of the Seventeenth century. This group comprise, as the expert recalls, Jacques Hupin, Carlo Manieri, Gian Domenico Valentini and, precisely, our Antonio Tibaldi, “registered in the States of the Souls of the Parish of Santa Maria del Popolo in Rome in 1675 as ‘Roman painter aged 40’”.

The appearance at Christies of signed works in 1990 and in 1998 has been essential towards the critical recovery of this artist; on the basis of these works it has been possible to reconstruct the corpus of the painter, which will certainly be better defined and expanded in the future, and which has been supplemented by works in private collections as the one we are publishing for purposes of comparison; as Dotti observes, the latter painting features numerous elements “typical of the iconographic repertory of the master which we can also find in the canvas” subject of this summary. These comprise the chiselled armature that is clearly shown in both, while a similar version of the graceful lapdog facing the observer, regally crouching on its cushion, has appeared in a painting that was recently presented in the antiquarian market. As to the dating, Doti suggests, “in the absence of certain chronological references”, a dating to between the seventh and eight decade of the 17th century.