Landscape with the miracle of the fish 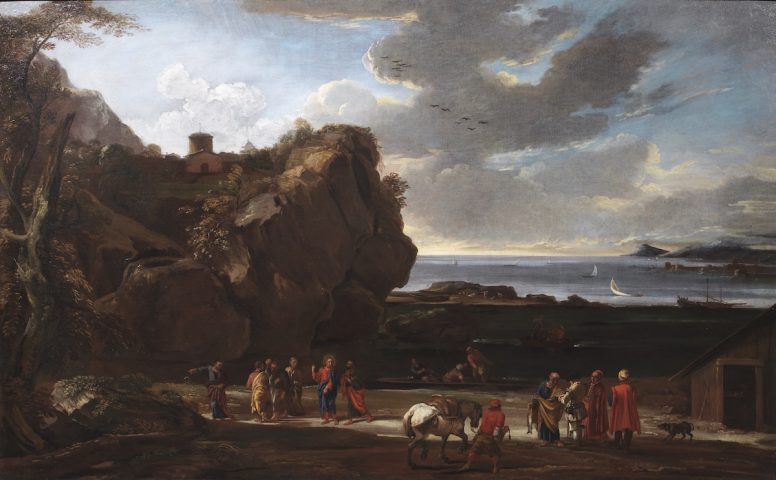 Landscape with the miracle of the fish

The artistic personality of this painter was identified by Roberto Longhi, who gave him the fascinating name of Monsù X. And it was the same scholar who, a few years later, announced that he had recognized the identity of the enigmatic landscapist as Jan de Momper, thanks to the discovery of a signature.

Biographic information on the artist is quite scarce and uncertain. He probably left his native Antwerp on the death of Joos de Momper II – in whose workshop he must have worked – in 1935, reaching Rome by the sixth decade of the Seventeenth century. The artist had already established himself and enjoyed a certain success in the eternal city when he in 1661 received an important and well-documented commission for a group of four landscapes from Cardinal Flavio Chigi for the latter’s residence in Aricca, with payments recorded between August and September 1665. Numerous works of his are also known to have been in the collections of another important Roman family, the Pamphili.

The painting we present here, which definitely deserves a place among the most important works of the author, features a landscape with people. It is characterized by its picturesque and savage accents – the great cliff which stands out in the centre – which reminds of the contemporary achievements of Salvator Rosa. As was customary at that time, figures painted in contemporary everyday costumes, of the kind found in “genre painting”, are combined with a story from the Bible which is thus rendered contemporary and at the same time adds distinction to this vast canvas, in which the true leading light in any case remains the majestic landscape.

Recently Patrizio Basso Bondini published the painting in a monographic article on the Flemish landscape painter, suggesting the possibility of the execution of its figures by Guillaume Courtois, also called the Borgognone. The cooperation between the two could have taken place also in the apse of the Collegiata of Santa Maria Assunta in Ariccia, frescoed between 1664 e 1666 by the French painter.