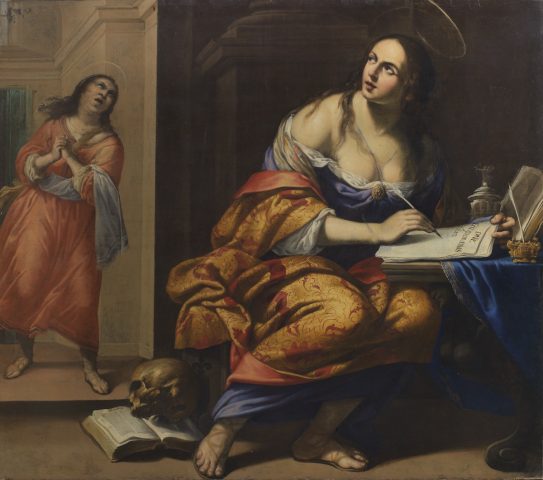 Pupil of Father Rutilio, a painter who was a leading figure in the anything but secondary panorama of Siena in the Seventeenth century, Domenico Manetti was to remain with his famous father, collaborating with him in numerous works until the latter’s death on 22 July 1639. This painting, which is definitely among the very best of Manetti junior – as Domenico seems to have acknowledged by affixing his initials and the date of 1649 – belongs to the most prolific period from a creative point of view of the artist from Siena, something which has already been observed by critics: “the majority of Manetti’s most convincing works date from the fifth decade, as his instinctive tendency to rigorously remain within the limits of the style elements of his father, translated in static and simplified compositive arrangements had not yet exhausted its full expressive potential”.

The canvas, a felicitous combination of gentle Caravaggism and Tuscan refinement, has recently been published. It features the saint as she dedicates herself to writing the passage from the Gospel “DNE Ecce quem amas infirm[atur]” (“Lord, he whom you love is sick”; John 11, 3), leaning on a splendid Baroque console; an ink-fountain with the coat of arms of the Sergardi family is also placed on the latter.

Achille Sergardi, Knight of Saint Stephan (who died on 3 April 1671), who was governor of the Tuscan fleet as of 1647, admiral as of the following year and finally general in 1652, belonged to this noble family, which was originally from Montalcino but which made Siena its home in the Fifteenth century. It is most probably him who had commissioned the painting, as the cross of the knights of the Order founded in the 16th century by Grand Duke Cosimo I, which is visible behind the family coat of arms, seems to indicate.