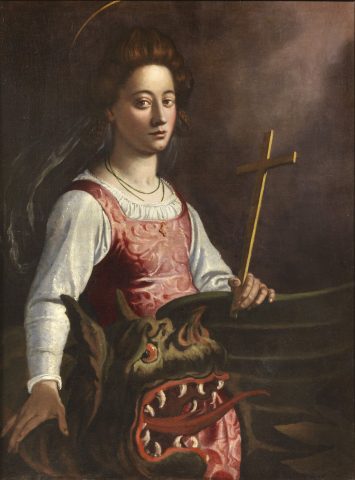 Jacopo Chimenti, along with Cigoli, Passignano and Santi di Tito, was among the most influential artists leading the way beyond the eccentricities and abstruseness of Mannerism, in the context of a renewed interest for nature drawing and a local early-Renaissance tradition which can be dated to the last decades of the sixteenth century.

Despite the subtle idealization visible in her face, the beautiful young woman depicted in this painting shows hints of a moderate realism, noticeably in the careful observation of the light caressing her wrist, or in other details like the fine necklace around her neck which creates subtle shadows. Such emphasis on natural observation forcefully contrasts with the monstrous being under the saint’s arm – which hints to her victory over the demon who appeared in the form of a dragon while she was in prison, waiting for her husband – a figment of the artist’s imagination, therefore unreal. The horrifying yet likable appearance of the creature, definitely harmless despite its gaping jaws and flaming tongue, looks as if it has been dominated by the saint and the cross that Margherita holds before it.

The composition was already known to the scholars. Another version of it, part of a private Florentine collection, was published more than once as a piece by the artist starting from 1980; it was later shown in the large solo exhibition of Chimenti, held in Empoli in 2004. The painting’s accompanying description highlighted the possibility that the woman’s face was a portrait and the stylistic debt to Cigoli for the ‘flowery’ feature of the dress and the compositional ‘ease’ of the dragon, dating the work around the second decade of the seventeenth century. Spinelli also pointed out the existence of a preparatory drawing for the martyr, preserved in the Accademia di Scienze e Lettere la Colombaria in Florence, and an inventory mention of “a saint holding a cross by l’Empoli” which was part of the Niccolini collection in the mid-seventeenth century.

The image, also known in an additional version that was on the antiques market, must have enjoyed great popularity, motivated by the belief that the saint was the protector of women in labor.