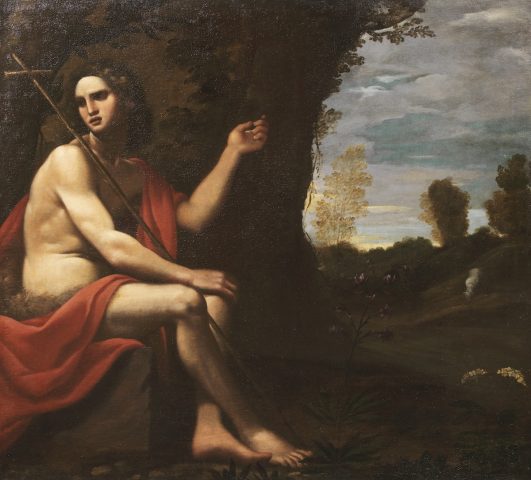 This mastery image of the saint, whose clear and illuminated complexion emerges vividly from the shady area in which the Baptist is resting, is the work of a prominent Parmese artist, Sisto Badalocchio. More or less the same age as a great fellow countryman of his, Giovanni Lanfranco, the author of this painting, after an initial phase during which he stayed with the latter and other young promising Emilian artists in Rome – a period in which he assisted Annibale Carracci with the decoration of the Farnese Gallery, returned to his native city in 1609 and remained there a few years. In 1614 we find him in Rome once again, after a short stay in Reggio where he worked on the frescoes of the dome of the church of Saint John the Evangelist; this work is a declaration of love for the great model of Seventeenth-century painters in Emilia – and not only- , namely Correggio.

It is to this second Roman phase of the artist, around the middle of the second decade, that this great canvas may be dated, according to the brief study authored by Giuseppe Berti. Like other similar works it “is inspired by a prototype painted by Annibale Carracci”, and specifically a canvas mentioned by Bellori which may have been retraced by Denis Majon in 2001; it “vaunts the unmistakeable formal characters of Sisto Badalocchio” during this stylistic phase.

The landscape view shown in the painting is remarkable, and reminds of the fascinating results of another great Emilian who was making his debut in those years, Il Guercino, and who painted the Landscape in moonlight which is now at the National Museum, Stockholm in the same years.