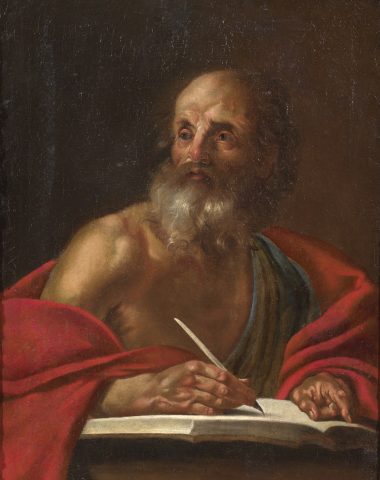 Among the favourite motifs of painters who adapted themselves to the Caravaggesque novelties in the early Seventeenth century, Saint Jerome enjoys a privileged position. This saint from the fourth century, doctor of the Church and the first translator of the Bible from Greek and Hebrew into Latin, appears in countless canvases from the early decades of the Seventeenth century, inspired by the perturbing images painted by Merisi in his brief and tormented career. Moreover, the rendition of the old saint, his body withered and emaciated by study and penitence, was well suited to the meticulous investigations on the human body conducted by painters dedicated to the Caravaggesque tradition, with the aid of a grazing light in the darkness. In such studies the modulation of the shades of the complexions served as counterpoint to the intense red of the cloak and the glaring white of the book or a cranium, the attributes of the saint.

Also this Saint Jerome is based on these chromatic accords, with pretty highlights created by the white pen, immersed in light, which stands out against the shaded breast, and skilful luminous reflections on the thick beard.

As to origins, this painting suggests a Southern Italian milieu, perhaps Naples, one of the areas in Italy which had been most profoundly influenced by the great master, who passed through the city on his long flight from Rome.