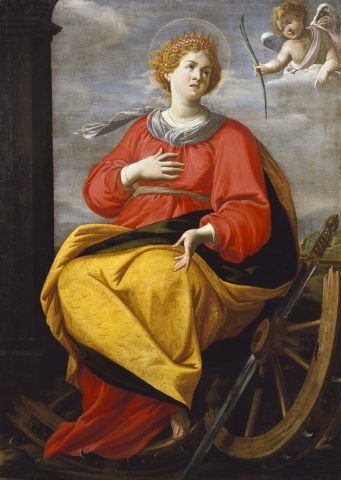 The canvas depicts Saint Catherine of Alexandria, seated on broken fragments of the spiked breaking wheel, the instrument of her martyrdom. A putto descends from the sky, offering her the palm leaf. It is a paradigmatic example of the artistic transition that took place from sixteenth to seventeenth century, balanced as it is between the remains of Mannerism and the incoming naturalism of the 1600s; this canvas has therefore been attributed by Giancarlo Sestieri to the Tuscan painter Cristoforo Roncalli, who was active in Rome for many years. However, better comparisons can be drawn with the most prestigious of the artist’s work outside the capital, that is, the frescoes for the dome (now lost but known through various drawings) and the Sala del Tesoro of the Basilica of the Holy House in Loreto. This commission busied the painter during the second decade of the seventeenth century, at the time when his proudly late-mannerist style encountered Caravaggiesque naturalism. This Saint Catherine has the same glazed lighting which explores the forms and goes in that same direction.

It is therefore a canvas belonging to the maturity of the artist, and can be dated between the second and third decade.