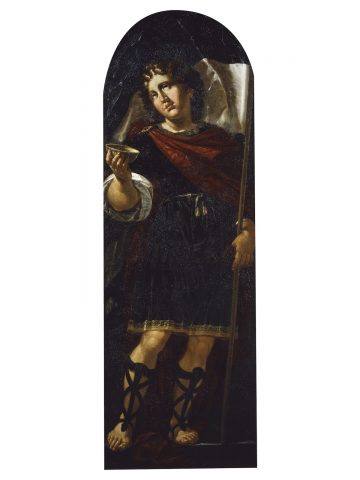 Shown standing, in full scale within an arched canvas, the personality is recognizable as Saint Ansano, the first patron saint of Siena. The preacher of Roman origin (who died in 304), who had arrived in Siena to escape Diocletian’s persecutions, is holding a bowl of baptismal water – the saint is also known as the “baptizer of the Sienese” – and a flag with the colors of Siena in the other. As underscored by Marco Ciampolini, author of a study on the painting, “one perceives the influence of the Sienese tradition” in the work, from the personalities of Casolani to the controversial ones of the Caravaggesque Rutilio Manetti, but with the “broken and pictorial brushstrokes of the Baroque style” which is, in our opinion, the salient aspect of this admirable painting. In fact, the work has been attributed with certainty by the expert to a painter from the late Seventeenth century, Dionisio Montorselli. His presence in Siena has been documented as of 1677 and he died in the city in 1710, he must however “must have spent some time in Florence, something which is suggested by the culture of his paintings, which above all bring to mind the changeableness of Pier Dandini, and his singular friendship with Francesco Maria de’Medici, governor of Siena”. Ciampolini compares this work, in particular, with the biblical heroes of the Tolomei College and with the Memoria Bichi at the State Archives of Siena; while the latter was formerly attributed to Francesco Nasini, the expert maintains it should be reattributed to Montorselli. Another very relevant comparison, we add, may be made with the two lunettes executed by Montorselli for the Oratory of San Giuseppe, with Saint Catherine of Siena and Saint Bernardine in a glory of angels – notice the typical chubby and benevolent physiognomies with curly hair – from the Nineties of the Seventeenth century. According to Ciampolini this painting may, in spite of the artist’s uncertain chronology, be dated precisely to that period.