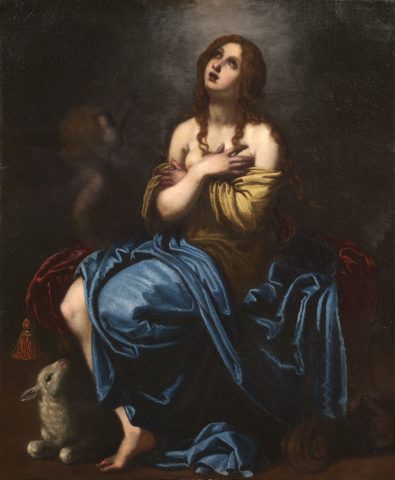 This is probably the most important find of recent years for seventeenth-century Florentine painting. The two canvases, of identical dimensions, one depicting Saint Agnese and the other Saint Dorothy, both young and martyrs, have been created together as a set, probably for a devoted client.

The canvas with Saint Agnes is signed and dated 1631, and therefore represents a new fixed point in the production of the Florentine painter, who was the son of a Flemish goldsmith. After an apprenticeship with Alessandro Casolani, Bilivert transferred to the workshop of Ludovico Cardi, abandoning once and for all the late-mannerist culture of his first master, and working instead towards a more theatrical luminosity, thus becoming one of the most impressive exponents of early seventeenth century Florentine painting. The sensitivity shown in painting fabrics, the soft light from which the figure emerges and which hides the angel in the half-light on the left side, as well as the lenticular attention on the coat of the lamb and on the velvet tassel, all prove the extremely high quality of this canvas, which stands amongst the highest mature work by the artist. The preparatory drawing of this painting is in the Cabinet of Drawings and Prints in the Uffizi Gallery in Florence.