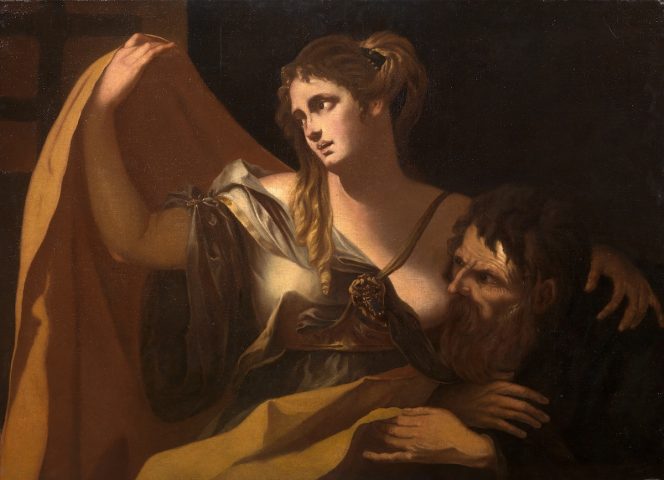 Antonio Gesino has recently, in an exhaustive treatise, conducted a critical study of this work, which the expert has attributed to the Genoese painter Pietro Paolo Raggi. As to the motif, Gesino stresses that it is a matter of a figure that is not uncommon in the Baroque period, inspired by the writings of the Roman historian Valerius Maximus dating from the 1st century after Christ; a kind of allegory of filial love, where the main role is played by the daughter Pero who, visiting her father who has been unjustly thrown in prison, decides to alleviate his agony from hunger by offering him the milk from her own breast.

To return to the author of the work, the expert observes that Raggi was a painter who probably received his training from the school of the Assereto, but who also was “in close assonance with Giovanni Battista Langetti”, an artist who was later to lead the group of the ‘tenebrosi’ or shadow-painters in Venice and who, also in this case according to Gesino, showed considerable affinities with the author of this painting in his youth, “to the point of causing confusions in attribution”. However, the painting in question must according to the expert be dated to a period after 1690 and the artist’s move to Bergamo, more specifically “to the early years of the new century”; in fact, this seems to be suggested by the antique-style elegance observable in the image of Pero, whose dress, with straight and thin folds, already seems to preannounce, considerably ahead of its time, the neoclassical turn.