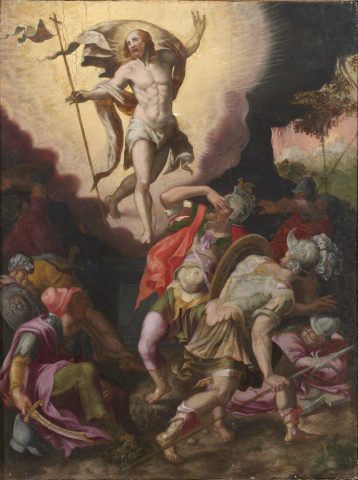 This painting on wood is an interesting example of the works inspired by a famous engraving by Cornelis Cort, dated 1569 and perhaps in its turn inspired by a model by Giulio Clovio. The rendition of this work, which is a quite precise reproduction of the engraving even if the harsh and angular rendition of the Nordic artist has been softened, must therefore be dated to around the eighth or ninth decade of the 16th century. The popularity of the graphic model is witnessed by the existence of other works inspired by it. One such painting, in the collection of Gianfranco Luzzetti in Florence, which essentially features a somewhat different figure of Christ but is clearly based on the same model, has recently been published with an attribution to Taddeo Zuccari. The Resurrection of Christ was one of the most popular and best-loved motifs in the Sixteenth century, when the theme was seen both as a fascinating possibility to tackle the challenge of representing the amazement and marvel of the soldiers, and a stimulating opportunity to paint virile bodies in various attitudes and positions, and thus to depict the musculatures and torsions which the artists of that century, deeply influenced by Michelangelo’s virtuosity, found so fascinating.