Rest during the flight into Egypt 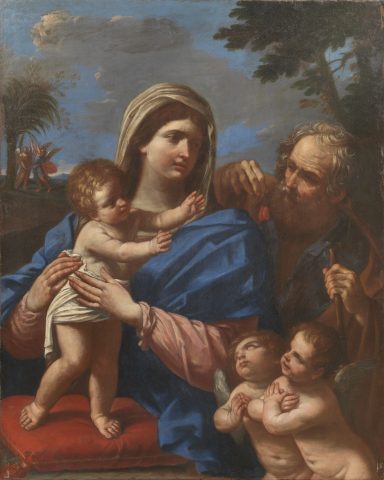 Rest during the flight into Egypt

The Virgin holds the infant Jesus, who stands on a beautiful red cushion, while also leaning towards Saint Joseph, who shows him two dates from behind Mary’s shoulders: this fruit is a Christological symbol that allegorically represents the passion of Christ. In the foreground two putti in adoration balance the composition.

It is a beautiful canvas with the ‘Rest during the flight into Egypt’ that clearly belongs to the strictest Guercino circle, as evidenced by the chromatic range, the beautiful landscape with the blue sky and the plants painted analytically, with branches that seem to move in the wind.

This is one of the most splendid compositions by Cesare Gennari, who was Guercino’s nephew and his close follower, and who inherited the workshop and all the goods after the death of the master, including drawings and sketches. The compositional structure and above all the use of soft chiaroscuro, which makes the flesh palpable and the drapery glazed, demonstrate the high quality of the painting, placing it among the most captivating works of the painter from Cento. The skilful use of light and the obvious desire to imitate the works of his uncle Guercino place this painting among the most mature of the painter’s works, around the eighth decade of the seventeenth century.