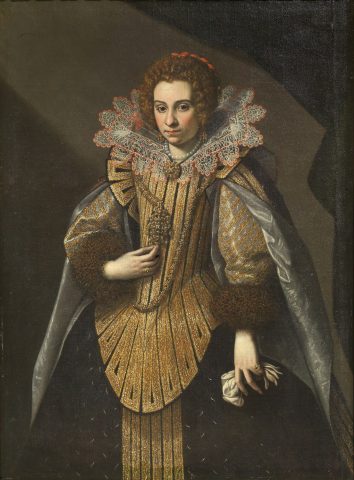 There can be little doubt as to the social rank of this young girl, depicted as she flaunts a necklace and jewels of uncommon lavishness. The magnificence of the gown clearly shows that she belongs to a ruling elite. Glancing more carefully, the Mannerist-style pendant pinned to her chest shows, within the elaborate drawing, a marquis crown, interweaved with other decorations.

Emilio Negro attributed the painting to Carlo Ceresa, one of the major portrait artist of the seventeenth century, after having noticed “a careful way of painting with a typically Lombard tone” along with minor Flemish influences. The scholar established comparisons with various works by the artist, a student of Daniele Crespi in Milan, such as the Portrait of a Suardi noblewoman, of the Accademia Carrara in Bergamo, and the Noblewoman showing a pearl, part of the municipal collections of the Castello Sforzesco.

Of particular interest is the comparison with the Marchioness holding an orange blossom, part of a private collection in Bergamo. In this canvas, a woman of comparable rank is portrayed with similar hairstyle and gown, embellished, like in our portrait, by a lace neckband. Even the jewelry looks closely related, as can be seen with the presence, in this painting too, of a marquis crown.

Vertova believes this painting to have been made between 1633 and 1635, so the canvas in question can be dated around the same time, during the early years of the artist’s activity.