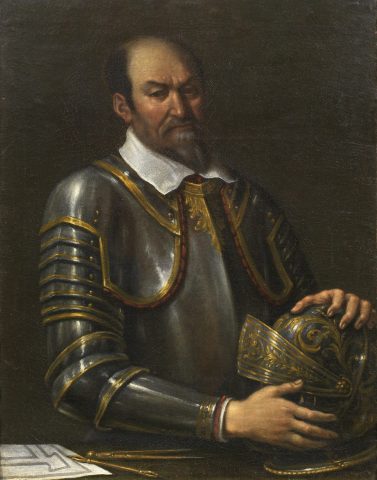 It is to Emilio Negro that we owe the recognition of the subject of this portrait and the attribution to Benedetto Gennari; the scholar has authored a study which casts light on the elements which make the work so interesting. The portrayed personality is a man in his mature years, shown wearing a sumptuous inlaid armour. In front of him, on the table top where the commander rests his helmet, we find a lead holder and a compass; to their left we glimpse a plan for a stronghold.

Negro explains that the chronological dates and style may be retraced to the Emilian school inspired by Guercino, and specifically to Bartolomeo Gennari, an artist who was the faithful collaborator of Guercino, and who “followed him when he moved from Modena to Reggio Emilia and who moved along with him to Bologna when the artist from Cento relocated his workshop from his native city to the Emilian capital” on the death of his rival Guido Reni in 1642. The attribution to Gennari, argues the scholar, is evident due to the “fluid and soft painting style which reminds of Guercino’s while featuring very personalized traits”, which are also to be found in other works by the author, from the youthful ones as the Crucifixion of Pieve di Cento to the more mature works which are more clearly influenced by the master, as for instance the Incredulity of Saint Thomas of Cento, Pinacoteca Comunale, and the Marriage of the Virgin at the Galleria Estense in Modena.

Returning to the portrayed personality, the available elements cannot but suggest an activity which is both linked to military life and to the architectural professions; these elements, along with the evident geographic origin of the work, have led Negro to identify the man as Giulio Buratti (1577-1652), “military engineer, superintendent and general accountant of the papal fortresses during the government of Pope Urban VIII”. Indeed, according to the scholar the map represents “one of the four lanceolate bastions of the inner walls of the four-sided stronghold”, the Forte Urbano of Castelfranco Emilia, which was previously located between the Papal State and the dominion of the Este family, a fortress which has been represented precisely by the master of the artist, Guercino, in his Portrait of cardinal Bernardino Spada. In fact, the cardinal was entrusted with the supervision of the construction of the fortress.

Emilio Negro has informed us of his intention to present the painting in an article to be published in the near future.