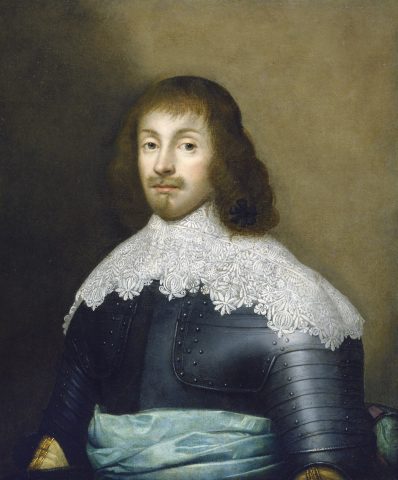 The young man portrayed in this painting, evidently a military man, is looking the observer straight in the eyes, with his bust in slightly three-quarter profile. He is wearing an armature, which is given a gentler appearance by a splendid lace draped on his shoulder, rendered with amazing technical dexterity. A silk band is tied around his bust. The style of his clothes, his hairstyle and the brown, softly illuminated background that makes the portrayed subject stand out, undoubtedly suggest an artist who was active in Holland as of the third decade of the Seventeenth century. Relevant comparisons, related both to the style and the apparel, may be made with various Dutch portraits from the period, as for instance with the Portrait of Fredrick V Elector Palatine by Michiel Janz. Van Miereveld, dated 1628-32, at the Kunsthandel Hoogsteder & Hoogsteder, The Hague.