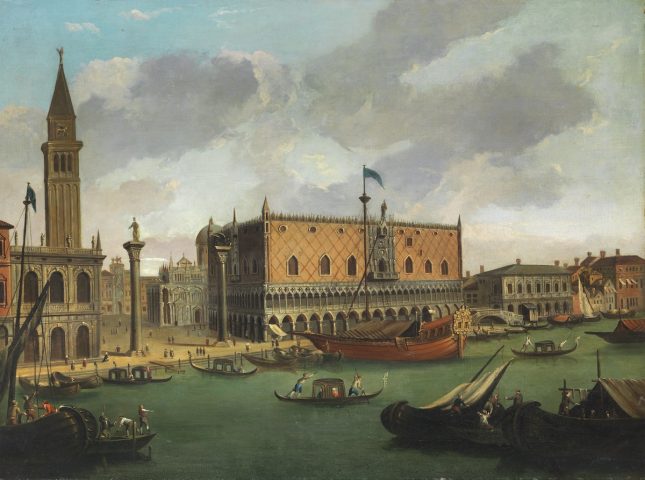 The fall of the Republic of Venice, given to Austria in 1797 with the Treaty of Campoformio, did not stop the Vedutismo, which kept celebrating the city and its glorious past.

In this landscape, depicting Piazza San Marco viewed from the Lagoon, under a beautiful evening sky, we can admire the Gothic Palazzo Ducale in the center, Palazzo delle Prigioni on one side, the columns of San Marco and San Todaro and the Biblioteca Marciana on the other.

Among the boats thronging the Canal, there is a pleasure barge; it is not the glorious Bucintoro, unfortunately destroyed in 1798 by the French occupiers, presumably before this work was made, but another richly decorated boat. Vessels like this appear, for instance, in the famous painting by Francesco Guardi, The departure of the Bucintoro for San Niccolò del Lido (private collection), while they are escorting the doges’ state barge.

Vincenzo Chilone, the artist behind this canvas part of an important Roman collection, worked initially as a set designer. After a short period in Udine, in the nineteenth century the artist devoted himself to landscapes. Among these, let us recall his Return of the horses of St Mark from 1815, a canvas celebrating the restitution of the horses stolen by Napoleon from the city.