Pair of coats of Arms of the Falconieri Family 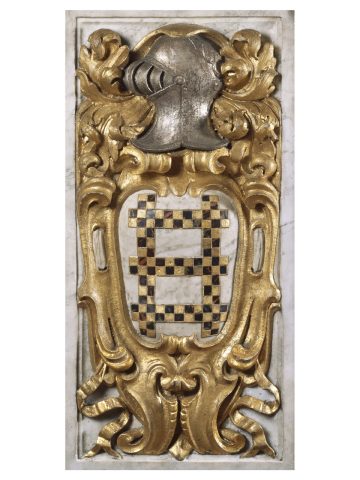 PAIR OF COATS OF ARMS OF THE FALCONIERI FAMILY

Gilt and silvered marble, with details in tortoise shell

This important pair of coats of arms was originally part of the altar of the Falconieri chapel, dedicated to the Immaculate Conception and located in the right transept of the Florentine Santissima Annunziata church. It consists of two sculpted marble slabs, each depicting the coats of arms of the patrician family, framed by a rich gilt decoration of typically Florentine late-mannerist style, and superimposed by a silvered crest embellished by decorative strips.

The altar has been realized around 1612, designed by Matteo Nigetti, a Florentine architect who received commissions from the Medici family.

A study of these two objects by Maria Cecilia Fabbri is in progress, soon to be published on “Paragone”.

Florentine sculptor, based on design by Matteo Nigetti (Florence 1570-1649)

The Madonna with the Child and Saint Giovannino