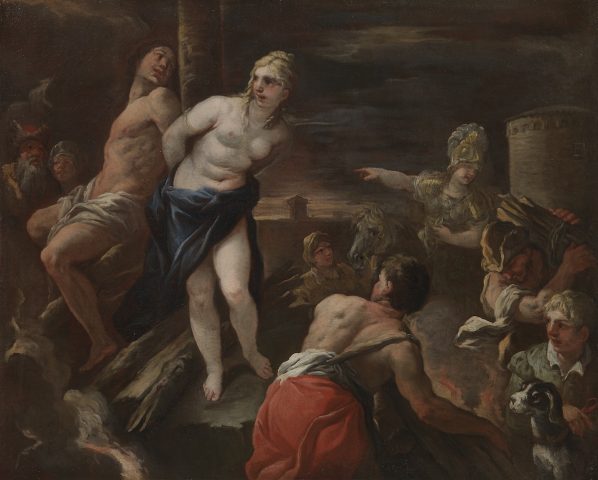 The episode depicted here, taken from Jerusalem Delivered by Torquato Tasso, is a fascinating story of which high moral values were appreciated in the past: to save the lives of the Christians of Jerusalem, accused en masse by King Aladdin of having brought about the mysterious disappearance of a religious image, Sophronia took upon herself the responsibility of what had happened, risking a fate at the stake. Secretly in love with the young girl, Olindus accused himself to save her, but they were both sentenced. Clorinda, the Muslim heroine on horseback who indicates the two youths as examples of truth and justice, was in any case to come to their rescue.

As Nicola Spinosa, author of a study on the painting, confirms, this canvas – which is a true lesson in masterly brushwork and speed – is an autographed work by Luca Giordano. The Neapolitan artist, among the greatest painters of the Seventeenth century and disputed by the sovereigns of all Europe, had in the years between 1675 and 1680 painted a large work (363×375 cm) with this motif, together with other monumental canvases, for the Roman residence of Marc’Antonio Grillo, Marquis of Clarafuentes. After passing into the Balbi collection in Genoa, it has arrived in the Royal Palace of that city, where it still hangs.

The scholar stresses that this hitherto unpublished painting, which is quite different from the composition that was once in the Grillo collection, is a “smaller version, with some variations, of a larger canvas that is today on show in the Royal Palace of Genoa”, suggesting a dating between 1680 and 1685. Giordano has interpreted this theme on other occasions, sometimes, as in the case of the larger Olindus and Sophronia (105×206 cm) in a collection in London, as a pair with a Rinaldo and Armida, following the general lines – turned mirrorwise – of the composition developed in the painting to be found in Genoa.

In its various versions, the theme was to become very popular among Giordano’s followers; replicas inspired by the master’s compositions have been painted by several Neapolitan artists, as Paolo De Matteis and Nicola Malinconico. Another version of this composition, which until now has been considered as autographed but which we believe should be subject of new verifications after the appearance of this work, is to be found at Burghley House, in England.