Nocturnal battle between Christians and Turks before a city in flames 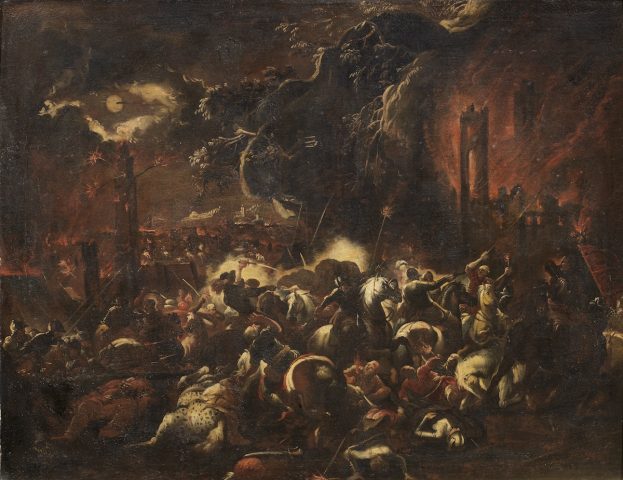 Nocturnal battle between Christians and Turks before a city in flames

“A fascinating fireworks display”: this is how Giancarlo Sestieri aptly describes this singular battle, which the scholar retraces with certainty to the mysterious Matteo Stom. In fact, very little is known about this anything but common painter, who was certainly of Dutch origins but worked in the Veneto region, “in a manner not unlike Brescianino, but in closer contact with Eismann and Calza”, and whose corpus centres on two works attributed with certainty: the Nocturnal Battle at the Gallerie Fiorentine, on the back of which it is written “work by Matteo Stom veneto 1680”, and the pair of paintings at the Accademia dei Concordi in Rovigo, documented by an ancient description which remembers the presence, in the house where the paintings originally hung, “two witty battles with a wonderful village and old buildings” by the painter. The definition of ‘witty’ is undoubtedly appropriate also for our work, which is in fact characterized by a perceptibly ‘charged’ stylistic cipher that goes well with the verve of our painter: “a rough and almost instinctive painting, based on dense figurative masses […] which is efficient, more than any other, in rendering the ferocious tumult of the ‘battle’ that is taking place”. In addition to the painting at the Gallerie Fiorentine, there exists another nocturnal work by Stom, also published by Sestieri, which is useful for purposes of comparison, namely the Nocturnal battle with siege scene, which is so similar in terms of setting and composition as to suggest an execution as pendant. As pointed out by the scholar, with the work presented here, no less than three battles with ‘nocturnal illumination’ by this intriguing author have by now been rediscovered.