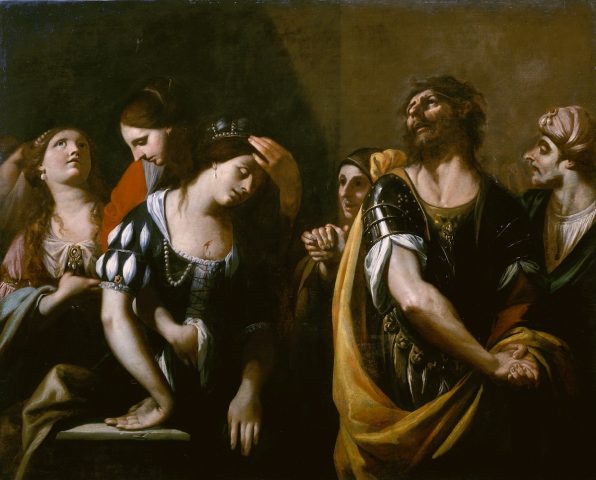 Praised by contemporary biographers for the “exquisite manner of the colouring, and for the nobility and subtlety of the composition of his paintings” Pietro Negri is part of the group of Venetian ‘tenebrosi’ painters who worked in the lagoon where they followed in the footsteps of Giordano and Langetti. Fascinated by the sharp contrasts and strong colours used by the two artists from out of town, the ‘tenebrosi’ dominated the scene in Venice in the late Seventeenth century, before Sebastiano Ricci and other great Eighteenth-century masters introduced the neo-Veronesian style. Educated – according to Safarik, author of a monographic contribution on this painter (1978) – in the circles of Ruschi and Zanchi, Negri has been recognised by Mina Gregori as the author of this painting. The expert observes, referring to the female figures on the left “how much Negri owes to Bolognese painting” while, remarking on Nero’s dramatic gesture with his clasped hands, suggests a relationship with theatre “which enjoyed great success in the years when the ‘tenebrosi’ were active in Venice”. Negri has tackled the same subject on at least one other occasion, in a painting which is now at the Gemaeldegalerie in Dresden, and which may be dated to the eight decade; while the two paintings appear quite similar in physiognomy, the latter differentiates by the less conspicuous and intense effects of light and shade, something which indicates that they were not painted in the same period. A mysterious face, seen frontally, emerges from the background in the area between Nero and the turbaned figure; this ‘repentance’ confirms the originality of the composition.