Nativity with the Infant Saint John 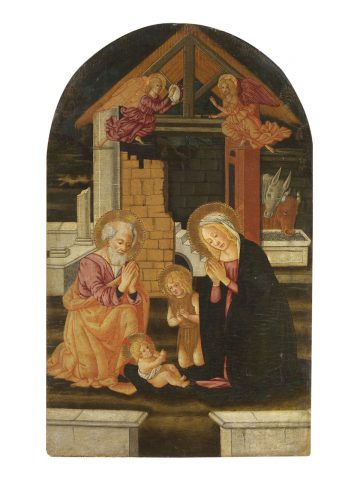 active in the second half of the 15th century

Nativity with the Infant Saint John

In spite of its simplicity infused with pure devotion, this charming nativity scene shows, indirectly, the artistic heights reached by the great masters of early Florentine Renaissance, and specifically the achievements of Filippo Lippi. In fact, Pseudo Pier Francesco, who is clearly the author of this work on wood, was a great admirer of the great and famous artist, something which is among others proven by his replica of the altarpiece painted by Lippi for the Medici Chapel. Realized around 1458, the work on wood was sold when the Riccardi estate was auctioned off and moved to Berlin (Gemäldegalerie) in 1821, at which point it was replaced by the work of Pseudo Pier Francesco, which still adorns the Chapel today.

The identity of the artist of the work presented here, which has initially been confused with that of Pier Francesco Fiorentino (1444/5-after 1497) has over the years acquired clearer contours thanks to the contributions of Berenson, Paolo dal Poggetto and finally of Anna Padoa Rizzo (A. Padoa Rizzo, Il percorso di Pier Francesco Fiorentino in “Commentari”, 24, 1973, pp. 154-175).

The work described here is included, with the attribution to Pseudo Pier Francesco Fiorentino, in the photo archive of Federico Zeri.