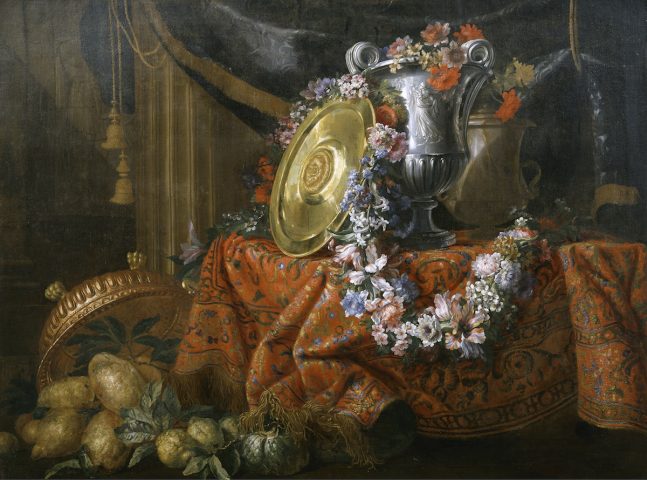 This monumental still life is a true exultance of colors; the artist gives a demonstration of his skills in rendering the texture of the objects: shiny metal, wrinkled citrons, flowers as light as silk, a carpet whose wooly surfaces are expertly imitated by brushstrokes. The evident classicism of the background, the furrowed column, the bas-relief struck by a blade of light, all confirm that this impressive still life is retraceable to the magniloquent French artistic creations dating from the period between the late 17th century and the first half of the 18th. In fact, Giancarlo Sestieri has identified the author of the painting as Blin de Fontanay, son-in-law and follower of Jean Baptiste Monnoyer (1636-1699), considered the leading figure of this decorative style.

Blin de Fontanay was admitted to the Academy in 1687 by presenting Flowers in a gold vase alongside a bust of Louis XIV (Louvre, inv. 4464), a painting featuring an arrangement with columns, garlands and metal objects quite similar to this work. He enjoyed considerable success, receiving royal commissions, executing “elaborate bouquets and sumptuous buffets by mixing flowers and fruit with silverware, for Versailles, Trianon and Marly”.

The most relevant comparisons of this canvas with works that have certainly been painted by the master may be made, as Sestieri suggests in his study, with the paintings found at the Manufactory of Sèvres and at the Fine Arts Museums of Marseilles and Orleans.