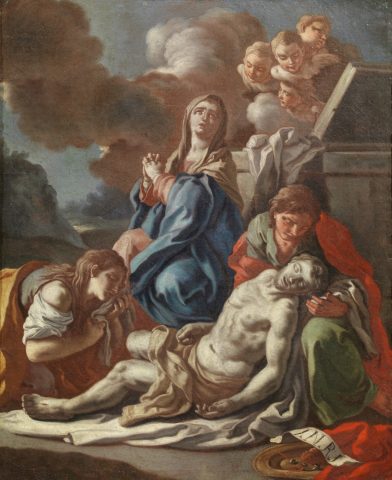 This moving scene focuses on the deposed Christ, mourned by his Mother, Mary Magdalene and Saint John the Evangelist, who lovingly supports his body. The extended and affable composition, the draping and the brightened palette, in which the strong contrasts favored by maestro Solimena are now just hinted, clearly refer to the painter’s most renowned pupil, Francesco De Mura.

After his apprenticeship, the Neapolitan artist was able to abandon the tenebrism and the oppressive atmospheres of the previous generation, by leading the Neapolitan art towards the eighteenth century and its new atmospheres, oscillating between Arcadia and Rococo, becoming one of its most representative artists. The work in question, attributable with certainty to one of the more talented pupils of De Mura, echoes the ideas already expressed by the artist in paintings such as the Pietà preserved in the Walters Art Gallery, in Baltimore (37.1125), dated around the end of the third decade of the eighteenth century, to which the figure of the Christ obviously relates, just like the small group of cherubs that watches from above the tomb.

The interpretations of the subject proposed by De Mura, characterized by an elegant and contained graveness, enjoyed great success, as testified by the many creations inspired by them.