Meeting of the Three Wise Men 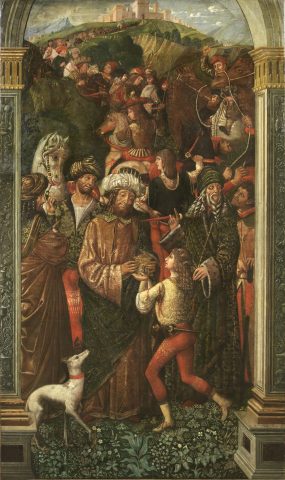 Meeting of the Three Wise Men

This vast canvas features, set within a classical architectonic frame, an episode of the long journey which was to lead the Three Kings to the new-born Christ, to offer him their previous gifts: “Then Herod called for a private meeting with the wise men, and he learned from them the time when the star first appeared. And he sent them to Bethlehem, and said, Go and search diligently for the young child; and when ye have found him, bring me word again, that I may come and worship him also. After this interview the wise men went their way” (Matthew, 2 1 – 12).

The exhaustive study which accompanies the work, conducted by the Expertise firm of art experts, underscores that the unusual image, which refers to “the meeting of the Magi and the preparation of the procession in order to visit and render homage to the Saviour”, illustrates an event which is not described in the canonical Gospel and that “the iconographic sources are consequently to be found in the apocryphal texts and in the Armenian Infancy Gospel”. The fairy-tale atmosphere, the elaborate Oriental costumes, the way the figures stand close together according to spatial criteria that are still Medieval, bring to mind famous images of this scene, beginning with the famous Chapel of the Magi in Palazzo Medici in Florence, frescoed by Benozzo Gozzoli around the middle of the Sixteenth century.

However, as observed by the specialists of Expertise, this work is undoubtedly inspired by the frescoes painted by Pinturicchio and his circle at the Piccolomini Library in Siena, which celebrate the gesture of Pius II; it was realized in the later years of the first decade of the new century. Specifically, the architectonic frame, the balusters and capitals with grotesque decoration seem, as the experts point out, quotations from the work in Siena. However, the perspective with which the large arch is represented – and this is a particularly significant element – is unlike the fresco of reference not central, but based on a lateral vision. This detail reveals that it originally belonged to a cycle of canvases, evidently dedicated to the journey of the Magi, which most probably culminated, in the centre of a vast hall, in an Adoration of the Child.

The intriguing question of identifying the author, starting from the ventures of the great Umbrian master, is still open. The central-Italian character of the work appears to be combined – to judge from the castle in the upper part of the canvas which is outlined by a clear-cut light – with Northern echoes that waver between Mantegna and Bellini, and everything is rendered with an expressive, sometimes almost popular style which also seems to suggest a Flemish element.