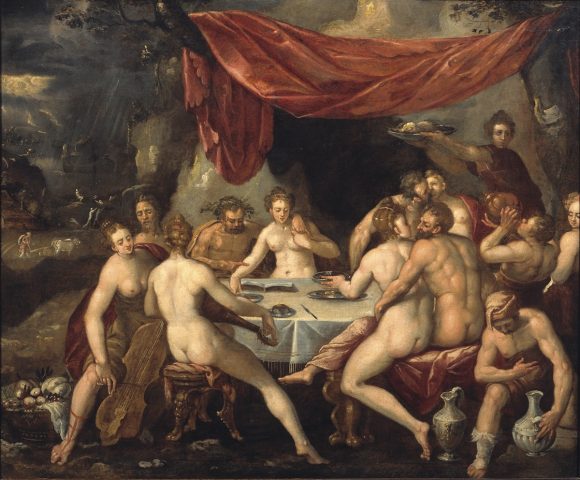 Under a rich drapery in characteristic Venetian red, a sumptuous banquet is taking place among an abundance of foods, inebriating beverages and music. In the background, as a violent storm is about to break out, some people are getting some boats into the water, while a large ship is only just visible in the dark waters, by now turbulent due to the rainstorm. The painting has reached us with an attribution, confirmed by a written expertise by Egidio Martini, to the Flemish painter Pauwels Franck, who was active in Venice where he was a collaborator of Jacopo Tintoretto, with a dating to around the ninth decade of the Sixteenth century. The painting illustrates the biblical event of the escape of Noah and his family with the arc, that precedes the Flood sent on Earth by God as punishment for its degeneration.

The subject is confirmed by an engraving by Johannes I Sadeler with the title “SICVT AVTEM ERAT IN DIEBVS NOE”, after a painting by Dirck Barendsz, that was with evidence the figurative source for our painting.

We must in any case consider that profane paintings suggesting a certain licentiousness were, at the time, often enriched by the inclusion, as a marginal image, of biblical scenes that rendered them morally acceptable.