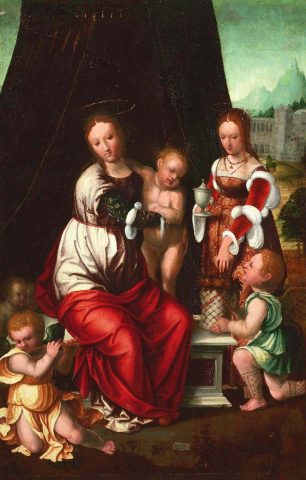 Flanders, first half of 16th century

The panel depicts the Madonna seated on a marble and porphyry throne, while holding a standing baby Jesus, who turns to look at the gift brought by an angel, consisting in fruits in a basket that evidently carry some Christological symbolism. Standing on the right is the very elegant figure of St. Mary Magdalene, dressed in fashionable garb, with red velvet sleeves, white shirt puffs and a brocade tunic, tied with a tight belt just below the breast. In the foreground another angel is playing the flute.

It is a very beautiful composition that echoes ideas of Leonardo for the cartoon of St. Anne, as well as ideas of Raphael for the great Florentine madonnas of the early sixteenth century. The painting and style of the work, however, are clearly Nordic and seem to derive from the older works of Joos van Cleeve. At the bottom is a label bearing the signature of the author, Andie de Gelders, a painter who is not otherwise known, but is clearly one of the many Nordic artists who, between the end of the fifteenth century and the first decades of the following century, came to work in Italy, in the great courts of Florence, Rome and Naples.

This panel presents, in fact, stylistic passages that highlight the attention given to the so-called anti-classical Roman painting, such as the putto with the flute, whose drapery is close to the style of Cesare da Sesto in Rome. These details indicate a dating within the second decade of the sixteenth century