Madonna with the Child and two angels 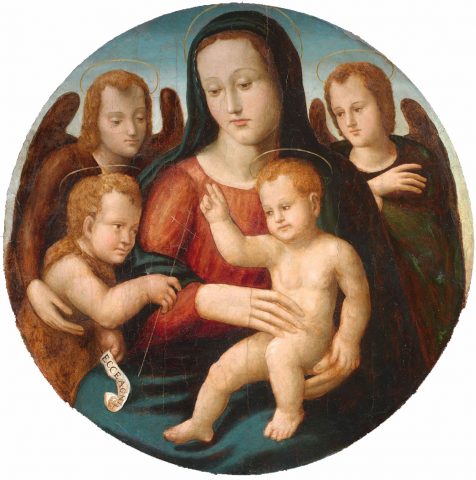 Madonna with the Child and two angels

We owe the recognition of this graceful Sienese tondo from the early years of the Sixteenth century as the work of a not very well known painter, Sinolfo d’Andrea Trombetto, to Marco Ciampolini. As the expert clarifies in his paper on the painting, the figure of this artist is first and foremost linked to the execution of the friezes of the church of St. Bernardino in Siena, together with gilder Andrea Magagna, documented in 1514. Among the paintings realized by this artist in that decorative enterprise, Ciampolini mentions a small circular paintings featuring the same motif and the “same gentle typologies as that of (our) tondo, with the same deformations and identical formal simplifications”.

In the same church where Magagna and our Sinolfo worked, Domenico Beccafumi left two fresco masterpieces some years later, in 1518: the Wedding and the Transit of the Virgin. The greatest Sienese artist of the Sixteenth century was to leave clear traces of his influence in a work on wood by Sinolfo d’Andrea which is now in the National Picture Gallery of Siena (inv. 353), the Madonna with the Child and saints, which Ciampolini has dated to his more mature years, and which is one of the works comprised in the critical reconstruction of this painter which most closely resembles the tondo described here. In fact, beyond the influence of the young Beccafumi, absent in the work examined here, we observe, in that work on wood, the same stylization and mannerism in the construction of the anatomies and the faces, which we find to be characteristic of Sinolfo d’Andrea and which we recognize in our painting.

Another work included in the catalogue of works by Sinolfo attributed to the artist by the self-same Ciampolini is a tondo, with the same motif as our painting, in the collection of the Diocesan Museum of Siena.