Madonna with Child and the Infant Saint John 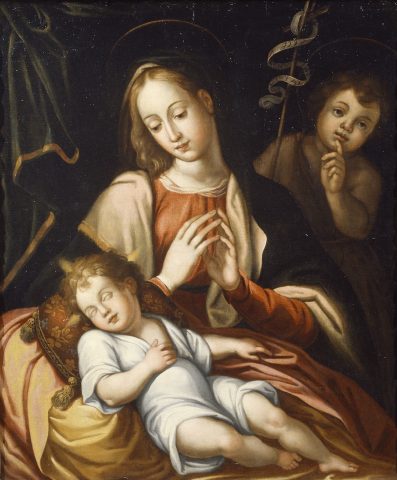 Madonna with Child and the Infant Saint John

The Madonna, her hands united and raised in prayer, is watching her sleeping child, whose head rests on a refined cushion interwoven with gold, with an affectionate expression. Behind the group composed of the Madonna and Child we see the watchful figure, visually balanced by a drapery on the other side, of the Infant Saint John whose gentle gesture invites to silence. The painting is clearly a work of the Florentine school of the late Sixteenth century, still imbued with a culture that, as witnessed by the refined effects of the shot fabric and – especially in the face with the characteristic round eyes – the influence of Pontormo in the figure of the Baptist, has its roots in the refined world of Tuscan Mannerism. In fact, Alessandro Nesi has retraced the work to Giovanni Maria Butteri, a Florentine painter who was active between 1570 and 1572 in the famous Little Study of Francesco I, the famous room decorated by statues, frescoes and painted panels, which the Grand Duke wanted as his own private space in the Palazzo Vecchio. Butteri later painted numerous works both for the city and the surrounding country, finally dying in Florence in the early years of the Seventeenth century. According to the expert, the work features “many resemblances with other late works by the artist” and in particular, due to the “use of the colors and the stylistic matrix influenced by Bronzino and Alessandro Allori” and the “characterization of the Virgin’s face”, with the Madonna with Child and saints at the Badia di Vaiano (Prato) and the Madonna of the Rosary discovered in Lari near Pisa. “The softly curled head of the Child”, on the contrary, “is almost identical to those of a number of small angels” in the Ascension and saints at the parish church of Massa di Valdinievole (Pistoia). As to the date, Nesi suggests a dating around the middle of the last decade of the Sixteenth century.