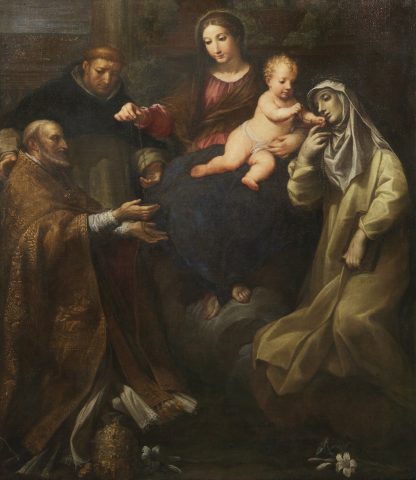 At the center of this large canvas is a group composed around the Madonna and Child. The Virgin Mary offers a rosary, with Saint Dominic as intermediary, to a kneeling Pope by whose side lays the papal tiara. The pontifice is of course Pope Pius V, recognizable by his characteristic profile and the inclusion of the naval battle scene, alluding to the battle of Lepanto, which we see through the window. Pope Ghisleri (1504-1572) who led the Christian armada against the Turks in 1571 dedicated his victory to the Madonna of Victory, thence called the Madonna of the Rosary. In the painting a rosary is also being offered to Saint Catherine, the Sienese mystic, depicted with a crown of thorns, stigmata and lilies.

Clearly this is a painting from the Cortona School, more precisely, it was inspired by the art of Pietro Berrettini from Cortona. This latter’s neo-Venetian style, beginning with the grand ceiling of the Barberini Palace completed around 1630, soon became the most widespread artistic trend throughout the Italian peninsula and was adopted by an infinite series of imitators and followers.

Among these, we can surely include Lazzaro Baldi from Pistoia who traveled to Rome at an early age to learn from Berrettini,  subsequently remaining in Rome and enjoying a notably successful career. He completed several important works there, among which three frescos in 1657 for Alexander VII’s gallery in the Quirinale Palace and a Vision of Saint John at Patmos painted between 1660 and 1665, “one of the pinnacles of ‘Cortonismo’”.

Among the works by this artist that are most similar to our canvas, whose authorship is confirmed by an old inscription of the reverse, we mention The Mystical Wedding of Rose of Lima, Amsterdam, Rijksmuseum (SK-A-596).

The theme of the battle of Lepanto found renewed impetus with the worsening of tensions with the Turks in the years preceding their definitive defeat in 1683 near Vienna, and it is to this period that we can most likely assign the date of our painting.