Madonna on the throne with the Child 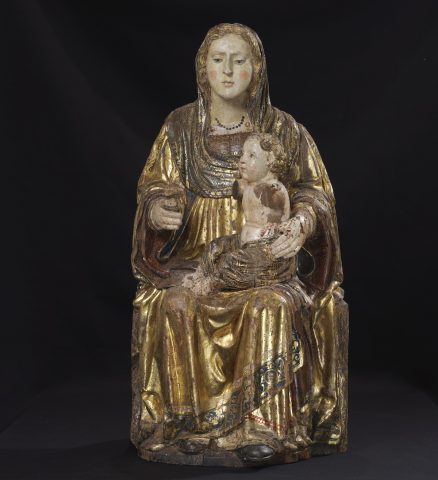 Madonna on the throne with the Child

One of the outstanding features of this monumental Madonna seated on the throne, the Child in her lap, is undoubtedly the rich and well-preserved decoration with polychrome and gilt parts. The Mother looks fixedly ahead, almost as if foreseeing her child’s destiny.

The solemn drapery she is clothed in, animated by rhythmic and ample folds of classical style, and the solidity of the overall arrangement induce us to date the piece to the period between the late Fifteenth and early Sixteenth century, and to a collection in the area of Lombardy, where the motif of the Madonna on the throne was, analogously to in the Veneto district, very diffused since the early years of the Fifteenth century.

Among the workshops that were active in the years when this sculpture was realized we remember that of the Del Maino family, one of the most important in the region for several decades. Giacomo Del Maino, author of a work with the same subject which is now at the Vittoriale degli Italiani, is in fact one of the artists whose work most closely resembles that of this anonymous sculptor.