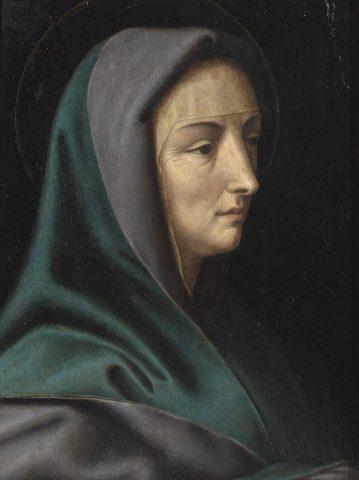 A fundamental identification for purpose of dating these paintings has been made by Alessandro Nesi, namely that the cardinal portrayed in profile in one of the works is the Venetian Pietro Bembo (1470-1547), one of the most prominent intellectuals of the Sixteenth century. The scholar has pointed out that the portrait of the famous personality is evidently inspired by the one found on a celebratory medal, namely the specimen whose execution is usually attributed to Daniele Cattaneo, realized around 1547, the year in which the man of letters died. These two paintings – which as the scholar observes were probably not realized as pendants but as a part of a series – were thus painted after that date, during the second half of the century.

The author of the two works on wood, which in addition to the portrait of Bembo feature the bust of a saint, or possibly also of the Madonna as an old woman, has been identified by Nesi as Girolamo Siciolante, “one of the most valid and well-known representatives of Roman Michelangelesque classicism in the period of the Counter-Reformation”.

As corroboration of his proposal the scholar refers to a number of comparisons, both for the male subject and for the female one. The former, “angular and skinny”, although it is copied from a medal and thus stylistically less valuable as evidence, may according to Nesi remind of one of the prophets standing to the left of Christ in the Transfiguration hanging in the Church of St. Mary in Ara Coeli in Rome. The comparison of the female head, with its “face with long and thin noes, small mouth and prominent and round chin” with those featured by various paintings by Sermoneta is equally significant. Among them we may mention the Madonna in the ‘Holy Family with the infant St. John’ which was formerly part of the Volpi di Misurata collection in Rome, and which is included in the Zeri photo archive Zeri (no. 16225), while Nesi suggests the “St. Catherine of Alexandria about to be beheaded in the Cesi altarpiece of St. Mary Major in Rome”, the “Saint Agnes of the ‘Sacra Conversazione’ of Calcinate di Bergamo” and the “St. Catherine of Alexandria of the ‘Sacra Conversazione’ on the chief altar of St. Martin’s church in Bologna”.

A portrait of Pietro Bembo with a composition not unlike this painting, which may have been inspired by the same medal but which is clearly by another artist, who may in fact be retraced to the Venetian school, is recorded as part of a Roman Roman private collection (photo archive of the Zeri Foundation, no. 40980).